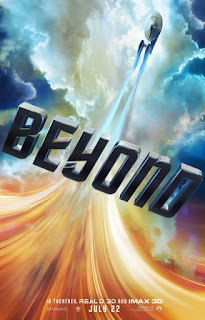 After three years in space, the crew of the USS Enterprise is getting a bit antsy.  Captain Kirk (Pine) applies for the job of vice admiral because he’s a bit bored, those with families are feeling the separation, and Chief Engineer Scottie (Pegg) is dithering about budget problems.  Suddenly, an escape pod appears, and its occupant, Kalara (Wilson) requests Captain Kirk’s help after an alien warlord attacked her ship and captured her crew.
In all good faith, the Enterprise heads to the crippled ship, only to find out it is a trap.  The remainder of the story entails taking on the warlord at great risk, suffering severe threats and requiring all the ingenuity, tactics, and memory the captain and his crew can muster simply to survive.
They do encounter an ally in Jaylah (Boutella) when she saves Scotty from soldiers about to capture him.  Her people were already captured and killed by the warlord Krall (Elba).  Much to Scotty’s surprise, she has come upon the Federation’s missing USS Franklin, making it her home, and ingeniously getting key equipment up and running.  Moreover, she has the ability to put a hologram around it to conceal it.
Star Trek fans will be thrilled with the returning cast from previous films, like Pine, Quinto, Saldana, Pegg, Urban, Cho, and Yelchin (sadly, Yelchin died earlier this year in an accident).  Beloved Spock actor, Leonard Nimoy also passed away this year, and tributes are made to both in the film.  Two new key figures have been introduced, played by Elba (Krall) and Boutella (Jaylah).
All the actors kindle the human/bot dramas into a warm and glowing fire, but the film is almost completely overrun by warring spectacles—including, of course, the obligatory hand-to-hand combat.  (How I wish filmmakers of blockbuster movies would eliminate this completely unnecessary motif, particularly in the context of futuristic technology).  The special effects are impressive, but it’s too bad they overpower interesting stories.  This feature clearly marks the influence of Director Justin Lin, known for his The Fast and the Furious action films.  Many will prefer such a hyped up version, whereas the rest of us are more focused on human drama.

A fast and furious rendition of the Star Trek franchise.

Posted by donnarcopeland at 9:32 AM