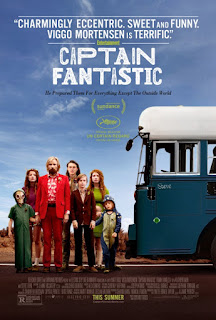 Get on board the bus.  This will probably be one of the more unusual rides you’ll make this year in the movies—along with Hunt for the Wilderpeople.  It’s basically about a father who wants to make everything right (perfect, perhaps) for his wife and children, so he takes them to live in the wilds of Washington State and carefully instructs them in survival skills such as:  Securing, growing, and preserving food; administering first aid; maintaining physical fitness; self-defense; education (and boy! do they learn philosophy, government, and politics!); and music.  I’m sure I left something out, but you get the point.  These are kids who would put the regular American student to shame.
Everything is going well (although we don’t know the back-story until later), and then a tragedy occurs, which makes their world topsy-turvy.  In order to talk about the rest of the movie, I have to spoil what it is—the mother dies.  But she doesn’t die at home—that wouldn’t present any practical problems beyond heart-wrenching grief—she dies at a hospital near the home of her parents who are decidedly Christian and have no sympathy for the lifestyle she (who has become a Buddhist) and her husband have chosen.
What follows is a resounding clash of cultures, which is used to comment about society today, at least in the U.S. and maybe in much of the western world.  The immediate dilemma for Ben is that the children desperately want to go to the funeral, which Leslie’s father has forbidden.  It’s also a dilemma because he has Leslie’s will which specifically states what is to happen after her death.
For all Ben’s (Mortensen) sage planning and execution of the “ideal world”, he underestimates how much different the world he has created is from the real world.  We see the incredible training and education he and his wife have provided for their children, but perhaps it’s because of the absence of the feminine influence when his wife Leslie (Trin Miller) goes to the hospital for an extended stay, Ben begins taking more risks than he should, e.g., climbing steep mountains during a thunderstorm, and over-applying his socialist philosophy by teaching the kids how to rob a store.
All of this comes to bear in the last part of the film, which entails a complex and near-disastrous resolution, but an excellent one, nevertheless.
Having been a fan of TV’s “Silicon Valley”, I was shocked to see that one of the actors in that show wrote and directed this film, Matt Ross.  It’s especially humorous because the character he plays on TV is shallow, without many social/moral values.  Clearly, Ross does have social/moral values, and wants to caution us about our current society.  Do our children know what the Bill of Rights is?  Could our children survive in the wild?  Do we really have an appreciation and respect for nature?  This is basically what Captain Fantastic is about.
I understand that when signing on to this project, Mortensen wanted to assure that the tone and message of the film was quality based, and there would be no "bad guys."  After his discussions with Ross, they made sure, for instance, that the child actors could actually slaughter a sheep for food and play musical instruments.  Mortensen himself maintains a garden at home.
Important to acknowledge is the contribution of Alex Somers to the music of the film, which elevates and perfectly captures every scene.

There are so many reasons to see Captain Fantastic.