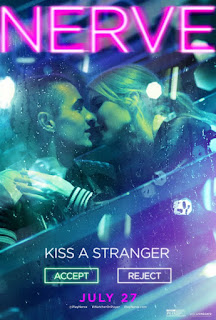 Reality games on television have spawned online gaming in the real world, where, as predictable, things can get out of control.  Vee’s (Roberts) best friend Sydney (Meade) nags and shames her into participating in the current craze, Nerve, a game in which “watchers” (i.e., voyeurs) devise dares for specific people.  Exasperated, Vee decides to give it a try, and it starts out mildly, where she is to kiss a stranger for five seconds.  With the support of her friend and fellow photographer Tommy (Heizer), she timidly approaches someone reading a book in a diner.  It’s Ian (Franco), who is so thrilled, he does a music-dance routine right in the diner, to warm applause.
But the way the game works, one “completion” brings on another dare—which the person can refuse, but when the chance to win big bucks is at stake, most gamers are sorely tempted, as is Vee, especially when Ian pleads with her.  The watchers have paired them up, so now all the dares are theirs to do together.  This leads on and on with higher and higher stakes and more and more dangerous dares.
To increase the complexity and heighten our interest (and nail biting), there are several behind-the-scenes intrigues involving Ian, a threatening figure named Ty (Machine Gun Kelly), and computer guru Tommy who is familiar with Darknet, so it becomes hard to know whom to trust.  It turns out that unseen forces are pulling the strings, making the marionettes dance to their tune.  This ends up in an ugly scene toward the end, with mob rule voting for the kill.
In the meantime, it seems a catfight is called for after Vee’s phone conversation with Ian about Sydney is overheard not only by Sydney, but also by everyone playing the game.  They have it out, and everyone wonders if their friendship will survive.  I could have done without this theme; it’s an unnecessary stereotype.
Emma Roberts is developing into a fine actress, but still lacks the charisma she needs to be a major star.  Her performance just needs a little more spark to show more depth.  The same could be said about Dave Franco—although his song and dance routine was most impressive.  Again, he needs to have more roles that plumb his depth to make him a leading figure.  Supporting actors Miles Heizer and Emily Meade show talent that will serve them well.  Juliette Lewis’ cameo role as Vee’s mother is very well done.
The book (Nerve by Jeanne Ryan) on which the movie is based makes a point about how online communication, being anonymous to some extent, is changing us.  Screenwriter Jessica Sharzer and directors Henry Joost and Ariel Schulman have taken the book and adapted it to make a suspenseful thriller that is likely to appeal to young people.  And for older people, it can be interesting and thought provoking in that it plays into current fears about the internet and how much data is collected about us.  It’s chilling to learn that whoever is behind the game of Nerve has access to all internet records about the players—their Facebook, their medical records legal records, everything.  In short, this film is scarier because it’s plausible.

A film illustrating some of the realities of reality games.