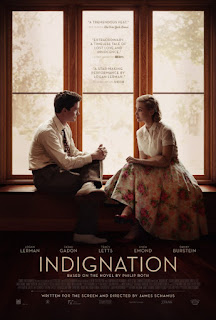 The noun ‘indignation’ captures well the most intense conflict in Philip Roth’s same entitled novel, adapted to the screen by writer/director James Schamus.  It refers to the bitter interchanges between the main character, Marcus (Lerman), and the Dean of Men, Caudwell (Letts), at his college in Ohio.  Marcus is of Jewish background and the college is predominantly Christian, with requirements for students to attend chapel services in order to graduate.  Marcus is indignant about that (he’s an atheist) and about the Dean’s intrusive questioning about his personal life.  Caudwell is indignant about an upstart young man who, although gifted, rebels against college rules and refuses to take the dean’s advice about working through his problems with people instead of simply walking away.  His lectures to Marcus are not effective because they go against the basic tenets of counseling.  Well-trained counselors know that one is unlikely to be convincing when advocating for changes in behavior in such a well-defended person who has had years and family influences to shape his behavior.  Thus, Marcus continues his rebellion with dire consequences to follow.
The movie Indignation is very well presented by the lead actors.  Lerman is pitch perfect in portraying a naïve, young Jewish man who is brilliant at school, but has been over-protected by his pessimistic, nervous father.  Marcus has learned to excel in presenting his arguments in debate class, but that mode does not usually fit well in social interactions.  He comes across more as an attorney in his arguments than in gentle persuasion.  Letts is an accomplished actor whose Dean Caudwell serves as a good counterpoint to Lerman’s Marcus.  He renders the combination of an authoritarian stance mixed with difficulties in socialization smoothly and accurately (e.g., praising Marcus on the one hand and then on the other, lecturing him intrusively).  Romantic interludes are provided by Marcus and his one-date girlfriend Olivia (Gadon), who ensnares his reluctant, ambivalent wavering on that occasion and on subsequent visits.  Scenes with Marcus’ parents played by well-known stage actors Emond and Burstein add color and interest to the story.
Writer-director Schamus adheres closely to the Roth novel, including some mystification in the narration in the beginning, and an explanation/surprise toward the end.  The time frame is in the ‘50’s during the Korean War, and Marcus is at college partly to avoid the draft.  Costume (Amy Roth) and production (Inbal Weinberg and Philippa Culpepper) designs are authentic for the period and beautiful to look at.  A nice touch is the theme of roses associated with the beautiful Olivia on three occasions.
The main problem with Indignation is that the war scenes toward the beginning and end are so dark, the action is not visible.  I don’t know what the director and cinematographer (Christopher Blauvelt) had in mind, but these are crucial scenes for the viewer to see to understand the context of the film.  Even the other scenes that are supposed to be well lit are often a bit blurred and cloudy, not sharp at all.  Also, to open the film in a nursing home, with a character we’ve not met is disorienting, unless one has perhaps read the book.  In all fairness, however, my viewing of the film may have been a function of watching it on an internet link on my laptop.  Most likely audiences in theaters will be able to see the darker scenes with more clarity.

Cinematic rendition of Philip Roth’s novel about coming of age in the ‘50’s.

Posted by donnarcopeland at 12:07 PM