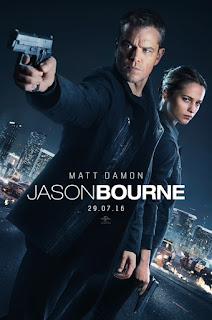 Matt Damon is back again as the unstoppable, hunted and haunted Jason Bourne.  In this journey, he is still off the grid, earning a living in physical fights.  Tommy Lee Jones is the current Director of the CIA playing his usual double-dealings with his agents.  New on the scene is Agent Heather Lee (Vikander) as a computer whiz who can spot and track targets and assets all over the world.  The terrifying, ruthless CIA asset is played by Vincent Cassel who carries a grudge toward Bourne from way back and pursues him relentlessly, impervious to the scores of bodies he leaves behind as collateral damage.
In addition to searching for Bourne, the CIA has proposed a secret surveillance program (Iron Hand) that it desperately wants Aaron Kalloor’s technology company to agree to.  The proposal is highly relevant today in light of the U.S. Government’s recent efforts to get Apple to allow it to look at terrorists’ e-mails and search for anti-government hackers who have invaded the government and U.S. companies’ websites. The CIA wants Kalloor’s social media platform, Deep Dream, to allow it to search its posts, but Kalloor is having the same response as Apple, saying that privacy is freedom and we need to protect that.
Bourne learns about this from Nicky Parsons (Stiles), in addition to her finding out more about his history and about his father.  She and others have pulled an Edward Snowden maneuver and gained access to the CIA’s data set about black ops. She wants him to help them bring the CIA’s operations to light.  When the Director of the CIA learns of this, he goes after Bourne and Parsons with a vengeance, sure that they intend to expose his department.  He then sends out the asset to kill them by whatever means necessary, and when that is not entirely successful, his plan gets hopelessly convoluted.
Damon puts his all into this role as in all the previous Bourne films, and pulls off superhuman feats in planning ahead and evading the pursuers with clever strategies and all kinds of vehicles; he’s always one step ahead, startling his adversaries with his acumen.  I must say, though, that I much prefer seeing him as the quirky botanist in The Martian. Jones can play a mean, double-crossing s.o.b. easily, giving the appearance of an all-knowing father.  There is probably no better actor to play the calculating, vindictive killer than Cassel.
It’s refreshing to see Alicia Vikander again take on a completely different role from those she has excelled in previously, and here she comes across as extremely intelligent and accomplished, but with feminine intuitions that serve her well.  She has read Bourne’s file and thinks she has such a keen sense about his psychology that she can “bring him in” again.
Riz Ahmed is an up and coming actor to watch; he is winning high marks for his roles in Nightcrawler and the current television drama, “The Night of.”
Paul Greengrass directed this production of Bourne and helped write the screenplay with Christopher Rouse.  They have succeeded in making the pace fast and furious, with nerve-wracking close calls and scenes of high suspense.  I only wish the car chase and hand-to-hand combat at the end had been shortened by half.  The camera is so jumpy, it’s hard to follow the action, and it ultimately becomes simply boring.

Another Jason Bourne thriller that hits the same high points.

Posted by donnarcopeland at 11:25 PM