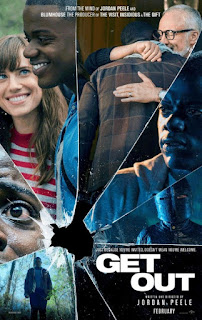 Get Out is a freak-out not long after the film begins.  It starts cozy enough with two young people in love, Chris (Kaluuya) and Rose (Williams).  She’s about to introduce him to her family, which creates a hint of anxiety in him because he’s black and she’s white.  “No problem”, she says; she hasn’t told them, but they’re liberal parents (“My father would have voted for Obama the third time”) and will be accepting.  Her father is a neurosurgeon and her mother a psychiatrist.
They arrive at her parents’ home, a beautiful mansion with forested acreage—no other home in sight.  Dean (Whitford) and Missy (Keener) greet them warmly, though a bit oddly.  Chris gets just a twinge of unease, but this is heightened when the brother Jeremy (Jones) arrives and clearly challenges Chris with racial undertones.
As the weekend proceeds, numerous meetings and happenstances occur, such as Chris meeting “the help”, two black people, one a groundskeeper and the other a housekeeper; a large traditionally hosted party, with wealthy guests who see Chris and immediately mention a black person they know (example:  A golfer says, “I know Tiger!”); and, significantly, an older woman with a much younger, vacant-eyed black escort who, at times, resembles a performing monkey.  Horrified, Chris recognizes him as someone who went missing recently in his hometown.
What follows is truly horrific, and will astonish you, repel you, and actually scare you (not something that happens to me much in horror films).  Chris is caught in a web he could not have possibly imagined from his earlier blissful days with Rose.  Who are these people and what are they about?
For his debut directorial feature, Jordan Peele, can be proud.  He has written a real thriller that is exciting and thrilling, but importantly has socio-cultural elements that make us pause and think.  It’s a window through which we see how white people try to befriend black people, while demonstrating underlying prejudices in the process.  The hoot at the end is that Peele turns the tables by showing white people lusting after “black” (stereotypical) characteristics.
I always love seeing Catherine Keener and Bradley Whitford playing their characters so true and entertaining, and they’ve done it once again here.  They have talent for giving a veneer of wealth, fine breeding and cordiality overlaying dark and mysterious aims.  Daniel Kaluuya carries the weight of the suspenseful story, and does it well, showing the transition from affability, good nature, and curiosity, to desperation.  Allison Williams shows her talent in portraying an upper class young woman who appears to have crossed the racial boundaries.
I did have a problem with this film.  Hypnosis is a legitimate, often extremely effective treatment but with mythologies surrounding it.  Get Out exploits these in the interest of enhancing horror, and while that is clearly effective, it perpetuates fears about hypnosis that are ungrounded.  I wish Jordan Peele had figured out another clever way to manipulate the characters in his film.

A thriller that addresses racial sensitivities.  Be prepared to see a genuine horror unfold.

Posted by donnarcopeland at 4:42 PM