THE GIRL WITH ALL THE GIFTS 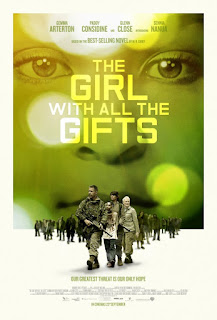 Yes, she has many gifts, including that of cunning.  Melanie (Nanua) is a survivor of a fatal fungus infection that has spread around the world, but she is immune to the disease, along with a group of other children.  Unlike most of the zombies with the fungus, these children can think, reason, and care about other people.  The kids have all been gathered up by Dr. Caroline Caldwell (Close) for her research; she is sure she can create a vaccine that will save everyone.  The problem is that she is deficient in ethics and grandiose in ambition, so has no qualms about using the children’s bodies for the vaccine.  The children are sent to school, but they are bound up in wheelchairs and staff has been instructed never to touch them or even consider them as human beings.  They’re referred to as ‘it’ and ‘thing.’
One of the teachers has a problem with this, especially regarding Melanie, whom she regards as a very special child who needs support and encouragement more than containment.  Melanie, in turn worships Miss Justineau (Arterton).  She is a very bright, polite, and creative student whom Miss Justineau comes to trust.
Through a series of events, the two end up being rescued by Dr. Caldwell and her Sergeant, Parks, and two other soldiers from mobs of zombies that have stormed the military base and are attacking anyone alive for a tasty meal.  Caldwell is still determined to complete her work with Melanie’s brain and spine, so is doing everything she can to protect her.  The group escapes in an armored truck, but must make their way to a point of safety, picking up supplies judiciously along the way.
Melanie is a big help numerous times, since she can go out in the open (the zombies won’t eat one of their own) for supplies and for reconnaissance.  The situation comes to a climax when swarms of children like Melanie descend on the group, and Dr. Caldwell feels forced to take matters into her own hands and harvest what she needs from Melanie.  This situation gives the film more depth in its ethical dilemma of how much one member of society can be pressured or forced to sacrifice him-herself for the good of humankind.
There is plenty of suspense in this thriller directed by Colm McCarthy, based on the screenwriter Mike Carey’s novel.  Sennia Nanua as the always sharp, well-socialized Melanie, is a joy to watch, especially at the end, when she makes a cogent argument using sound logic.  Glenn Close, known for her eerie, sinister female roles, comes through perfectly as the gentle-tongued older woman with seething ambition.  Paddy Considine and Gemma Arterton are also perfect in their support roles of basically normal, thoughtful people interested in giving their jobs their best.

An updated zombie movie with an interresting twist at the end.

Posted by donnarcopeland at 10:33 PM