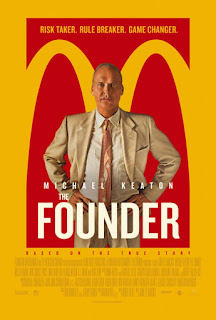 Such an ironic title, as one finds out by the end of this dramatization of Ray Kroc (Keaton), the known founder of the McDonald hamburger franchise.  This film is noteworthy in telling the story of how that came to be and the people involved, of which most of us were doubtless unaware.
Kroc starts out as a door-to-door salesman and schemer of investment projects, many of which were groundless for potential.  His weary wife (Dern) has become skeptical of his harebrained schemes, and simply wants to continue their comfortable golfing country club life with friends.  Kroc is currently trying to sell a milkshake maker that is supposed to speed up the process considerably, but we see doors shut in his face over and over.  Then he gets a message that a restaurant in California wants to order 6-8, so drives pell-mell from St. Louis to the one and only McDonald’s Drive-in owned by brothers Dick (Offerman) and Mac (Lynch) McDonald.
This is in the 1950s, when all the drive-ins had curb-hops who took your order and brought your food on a tray that attached to your car.  Ray eats most of his meals at drive-ins, and we see him get annoyed when his order gets mixed up in one way or another.  One of the funniest moments in the film is the screenwriter’s (Robert D. Siegel) portrayal of Ray’s first visit to McDonald’s (with golden arches), where he has to get out of his car, wait in line, place his order, and receive it in a paper bag and cup.  Befuddled, he finally realizes that he must eat it in his car or on a park bench.  When he finds the hamburger is delicious, he immediately goes to talk to the owners.  But he has more in mind than simply their order of the milkshake machines; he wants a tour of their business, which they readily do, showing that speed and natural ingredients are secrets to their success.
Ray immediately asserts himself by offering numerous suggestions for increasing their business, most of which the brothers decline to accept.  After much pressure, though, they finally give in to the idea of franchising McDonald’s.  They had tried this before, but gave it up because quality control could not be maintained.  Ray counters their objections by offering to play that role, and assuring the McDonalds that he would oversee operations at all the franchises.  The McDonald’s produce a contract that stipulates that all changes in the franchises must be approved by them.
The McDonalds continue to deny almost all of Ray’s suggestions, and in frustration, he begins to ignore them and do with the franchises whatever he pleases.  Of course, this all comes to a head and we hear the end of the plus/minus story.
Siegel’s screenplay continues his fine writing skill (The Blind Side, Turbo, The Wrestler) in presenting a script that avoids the potential for being boring (business, sales) by focusing on the personality of the lead and its subtle transformations across time, and the story’s relevance for contemporary times.  Keaton’s realization of Ray’s character is marked by a combination of charisma, self-interest, and willingness to slight the ethics of his behavior.  It’s a little akin to his Birdman role, without the imagination shown in that film, but Keaton’s performance is just as good.
Director John Lee Hancock (The Blind Side, Saving Mr. Banks) knows just how to bring the screenplay to life and show how the film is a part of American corporate history as well as McDonald’s specifically.  It moves at a good pace, always keeping our interest and fascination with the subject and the characters high.
Kroc is to be credited with the commercialization of the hamburger business, much to the McDonalds brothers’ dismay.  He converted it into a real estate business (Franchise Realty Corporation) by buying all the properties on which the franchises were located, introduced “unnatural” powdered ingredients for milkshakes, and expanded the business beyond U.S. borders.  I don’t know, but I imagine there are similar stories to tell about many of our U.S. corporations.

Posted by donnarcopeland at 10:13 PM