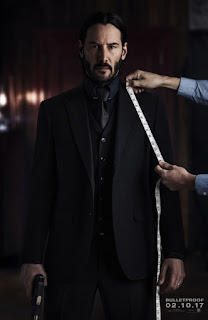 It’s rather amusing that a group that thwarts society’s rules at every turn has a strict set of rules they must follow.  This is the world of crime syndicates, which John Wick (Reeves) became involved in, but is trying to leave it behind.  But Wick owes a debt marked with blood to Santino (Scarmacio), part of a crime syndicate, and Santino wants to extract payment.  No small thing; it’s to kill his sister, Gianni.  Santino wants her seat at the Table of 12, rulers of the syndicate.  But Wick is “out of the business” and refuses to do the job.  Pressure is brought to bear (as in fire-bombing his house), and Wick has no choice but to go to Rome and carry out the assignment.  Because the syndicate is rich and international—once again, with strict rules—Wick is given all kinds of luxurious accommodations (transport, hotel, grooming, and guns) to carry out his task.
He goes to Rome, is taken by surprise by Gianni, and Santino’s actions then make the story much more complicated.  The strict rules of the syndicate are broken, Santino is foolish in not listening to Winston’s (McShane) counsel, and so all hell breaks loose.
The film maintains the momentum of the first film, and keeps us intrigued.  Writer Derek Kolstad made the script intelligent and gripping, throwing in line after line of quotable quotes:  “Death’s very emissary” (Gianni to Wick), “Consider this a personal courtesy” (spoken a number of times), and “What have you done?...Finished it.”  Dan Laustsen’s cinematography is breathtaking to look at on its own, the pièce de résistance, being the last shoot-out in a museum’s hall of mirrors (ironically called Search for the Soul).  And since the director, Chad Stahelski, is a former stuntman, he and his crew have highlighted the fights with masterful choreography.  (There are so many, that without the artful rendition, they would end up being boring.)
Reeves continues in his ability to portray a powerful action figure with soulful inclinations and heartbreak while still being able to fight off however many adversaries come after him.  Supporting figures offering gravitas (McShane), intrigue (Rose), sleaziness (Scarmacio), depth (Common, Fishburne), and humor (Leguizamo), strengthening the movie’s quality.
All in all, if the viewer takes to action films—with their obligatory car chases, loud gunfire, and choreographed hand-to-hand combat—John Wick:  Chapter Two will satisfy and please.  For others, it is a well-conceived and engaging story if your ears can take it.

Hold your hats for a crime story ride.

Posted by donnarcopeland at 2:08 PM