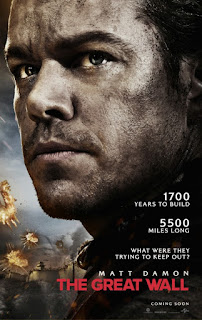 Visually striking with some impressive special effects, The Great Wall could be a lesson in our current times as to how effective walls are for countries.  The Tao Tei are vicious monsters known for invading China every sixty years, and that time has come again.  They are fearsome dinosaur-like (allosaurus) beasts with huge heads and pointed teeth.  They come in droves—thousands at a time—and can climb walls and leap into the air.  They’re even smart enough to figure out how to get inside the wall and attack from there.  The Chinese have their own special weapons, including balls of black powder that explode on impact or near fire.  They can send out female warriors anchored by ropes on narrow protruding fingers high up on the wall to fight in the air.  They can send out comets of fire to light on the invading troops.
Unfortunately, the story and the dialog among characters tend toward the unimaginative and ordinary.  Basically, two scruffy men hoping to beg, borrow, or steal the rare black powder, are captured by Chinese militia and taken prisoner.  William (Damon) is experienced in warfare all over the world and looks at the situation they’re in with the intent of finding an intelligent escape.  His friend Tovar (Pascal) is not as smart or sensible, and when they encounter another prisoner who has been there 25 years after he was caught trying to steal black powder, they devise a plan of escape.  The Chinese will not allow any of them to leave the compound so as to prevent any knowledge of their secret weapons getting out.  William and Tovar were supposed to be killed, but after they proved their mettle in a surprise attack by the Tao Tei, they were spared.
Then, there is a complication.  Commander Lin (Jing) and William have developed an awkward relationship that is part competitive, part respectful and part mistrust.  In their brief encounters, she does get through to him on the importance of trust (xin ren), which influences his usually mercenary intentions.  In demonstrating to the Chinese his military skill and getting their respect, he becomes more invested in protecting them and, potentially, the whole world, because military strategist Wang (Lau) has said that China would be only the first country to fall prey to the Tao Tei.
Tovar is incredulous and scornful of William, and thus begins a real schism between them that has been simmering for a long time.  The rest of the story plays out much as one would expect, with harrowing scenes, intrigue among the three rogues, and Chinese cunning.
Damon is up to his award-winning reputation, but I was disappointed in Dafoe’s character not being more sinister, which he does so well.  That has more to do with direction, most likely, than to him personally.  Pascal is convincing as a rascal, and pulls off some of the few acerbic comedy scenes.
At a time when the Chinese and the U.S. are launching a major collaboration in filmmaking, this film may be a harbinger of success, but maybe not.  Director Yimou Zhang (House of Flying Daggers, filming of the opening and closing of the Beijing 2008 Olympic Games), a respected filmmaker, must have had to incorporate the input of many writers and producers, which sometimes has a blunting effect on creativity.  At any rate, The Great Wall will probably not be an A-list movie, but for those who like action more than dialog and story, it may satisfy.

Special effects over story for this film.

Posted by donnarcopeland at 2:38 PM