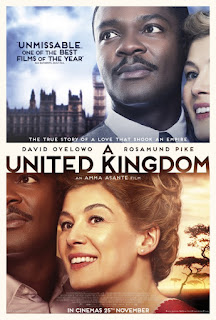 As in her previous film Belle, Director Amma Asante has pieced together a compelling production based on the true story of Seretse Khama (David Oyelowo).  In the 1940s, Khama underwent years of wrestling with his uncle, the Regent of Botswana in Africa and the British government to retain his right as the heir to the crown. The problem?  The uncle was devoted to his nephew until Seretse fell in love with a white British woman.  South Africa as a British commonwealth stood as a triangular player in the drama in its investment in apartheid and its importance to the British economy.  It’s a lesson on the intrusion of politics and self-interest into government affairs, which can influence leaders’ decisions.           The story is a heartbreaking account of how the Khamas endured long separations, even during Ruth’s (Pike) pregnancy, complicated by diphtheria and the birth of their child.
Oyelowo and Pike as the two central figures bring passion, loyalty, empathy, commitment to service, and humility to their characters.  Each has an impressive record of well-deserved acting nominations and awards:  Oyelowo for Selma, Nightingale, The Butler, and The Queen of Katwe) and Pike for Gone Girl, An Education, and Made in Dagenham, and both bring their talents to bear in this film.
Writer Guy Hibbert presents the historical record clearly, mixing in additional dramatic elements that make for a gripping tale.  Above all, it shows how insignificantly appearing one person can be on the world stage when he is involved in international affairs.  And, consequently, the deep-seated ire that is stirred up by his sense of helplessness.  But the history also shows how keeping a cool head, engaging support from wherever one can, and using wit and craft in fighting for causes may just be the winning hand.
Cinematographer Sam McCurdy’s lush and culturally rich scenes in Africa contrast well with the urban busyness of London, and Patrick Doyle’s music from both countries meshes perfectly with the visual richness.
This is an enlightening view of a history most are likely unfamiliar with, and which is eminently topical for today’s times.

A hard fought struggle to retain one’s due, and the threats posed by blatant racism.

Posted by donnarcopeland at 10:19 PM