CITIZEN JANE: BATTLE FOR THE CITY 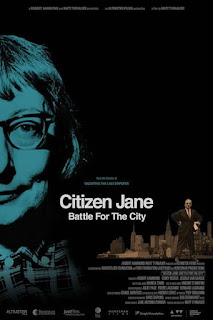 Courageous Jane, taking on the influential leaders of New York City in the l950’s, made landmark strides in challenging them to take a different perspective on city planning.  The importance of the topic is noted by the observation that the scale and speed of urbanization from the 1950’s to now is the greatest in the history of cities.  Moreover, what we’re doing now will shape cities for years to come.  This documentary addresses the question of what constitutes a successful city and who it is who makes decisions about its size, form, and function, as well as who will live there.
In the mid-20th Century, two figures stand out as embodying the issue of city planning.  One is Robert Moses, a modernist New York City planner with grandiose ideas about what was possible, as well as strong beliefs about public housing and transportation.  His opposition included a cheeky journalist named Jane Jacobs, who contended that cities should be about people, public places, and neighborhoods that are inter-connected and accessible.  Moses championed the automobile and the need for throughways that necessarily had to cut through green space and neighborhoods.  And although he started out as a progressive wanting to address city blight and areas of poverty, he was looking at it from a distance—an aerial view, so to speak.  Whereas Jane walked the streets and made astute observations from which she formed her ideas about what makes a city vibrant and successful.
To address the city’s poverty, Moses favored tearing down tenements (which he did by the thousands), “wiping the slate clean”, and starting all over again, eliminating the sidewalk culture and people clustering together.  He was late in realizing that this vision resulted in isolated communities, dead-end streets, and separation of work, residential, and recreational areas, along with residential sectioning based on social class.  Three of his most outrageous ideas were to 1) build the Cross Bronx Expressway, tearing up vital neighborhoods and essentially creating a wall between north and south Bronx; 2) build the Lower Manhattan Expressway, dividing it up like he did the Bronx; and 3) run Fifth Avenue through Washington Square Park.  Fortunately, because of the activists’ efforts, he was denied the last two ideas.
Jane Jacobs expressed her opinions on city planning in one of eight books she wrote.  In The Death and Life of Great American Cities, she questioned city planners (Moses’ brand was repeated in cities across the country) and countered them with her own vision of what constitutes successful cities:  Diversity in people, jobs, uses of streets, types of buildings, and the accessibility of all these to all people.  “Fit your plans to people; not buildings”, she would say.  One of Jacobs’ most fundamental beliefs about cities is that the city is a living, ever-changing organism, and we need to manage the change organically and on the basis of our observations, getting input from the people who reside in it, rather than taking a top-down approach to planning.
The comprehensive, engaging documentary traces the early lives of Moses and Jacobs and the evolvement of their ideas and actions across the many years of their careers.  The cinematography by Chris Dapkins is extraordinarily good in lustrous black and white, eye-catching colors, and original footage from the time.
A cautionary note at the end of the film is that what happened in the U.S. in the fifties, is now going on in China, where they are creating isolated developments without streets that are likely to become the slums of the future.


Posted by donnarcopeland at 12:01 PM