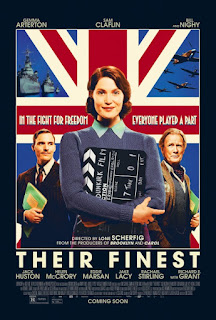 How do stories get made?  I like to think that the process shown in Their Finest is art imitating life—that after a bit of brainstorming, the writers sit down and flesh out the script.  In this instance, the story has many layers—comedy, romance, and drama—all while the Germans are bombing London in WWII.  The comedy comes from the actors doing very human things, having touchy egos and eccentricities.  The romance(s) involve the main character, Catrin (Arterton), her artist husband, and another character.  The drama shows us what it is like to live in a city being bombed—the hits and destruction, the near misses, parts of ceilings and whole buildings falling all around.  In the midst of this the British people carry on as if they’re programmed to do so.
Catrin is elated when she lands a job as a writer for the British Ministry of Propaganda, which is to make a film to boost morale in the country, but eventually, it wants to wow American audiences with it and possibly convince the U.S. to join in the war effort.  Mentoring Catrin is Tom Buckley (Claflin) who seems more egalitarian toward women than other men of that time, and when Catrin attempts to move the film they are making toward a more female slant, he is one of the few who get it.  But they have their disagreements and conflicts too.
Some of the humor derives from the way men treat women, which seems quaint today, but was actually typical in the early 40’s.  So baldly stated:  “You’ll be paid—of course we can’t give you what a man would make—so, two pounds a week.”  “OK”, she agrees, and feels so proud to be earning anything.  Male egos, actor egos, administrative “spies”, crusty forward women—they’re all put through the comedic mill.
Dramatic pull is considerable as we see Catrin struggle with her life and Tom taking an interest in her and boosting her self-esteem.  The actor Ambrose Hilliard (Nighy in one of his spotlight performances) is vain and touchy at first, but gradually relaxes and allows his real talents to emerge.  One of the most rewarding aspects of the film is to see a number of characters make positive changes, often as the result of feedback from those around them.  Award winning actress Gemma Arterton (The Girl with all the Gifts, Tess of the D’Urbervilles) is perfection in portraying a woman of the time—outwardly compliant, charming, and helpful—but thoughtful and with strong opinions inside, and above all willing to take risks.  Her face hardly moves, and you know what she’s thinking, or wonder what she is thinking.
Lone Scherfig’s direction of this film-within-a-film shows considerable talent in revealing her understanding of and sensitivity toward women in this film, as in An Education.  She can manage complex, layered dramas that tell multiple stories at the same time, while getting across moral, ethical, and humanitarian principles along with pure entertainment.  Composer Rachel Portman travels on the same wavelength with an impressive, award-winning filmography (Emma, Bessie, Never Let Me Go, Chocolat).