QUEEN OF THE DESERT 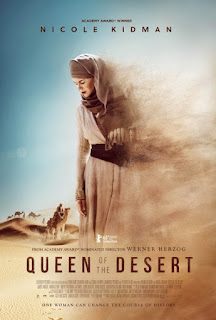 Celebrated filmmaker Werner Herzog takes us on a journey with Gertrude Bell, a remarkable British woman who in the early part of the 20th Century took it upon herself to explore the Middle East on her own with a small staff.  She was a writer, archeologist, explorer, mapmaker, and political advisor to the British Empire, wielding considerable influence on how boundaries were drawn in the area following WWI.  She developed a keen interest in the Bedouin tribes of Saudi Arabia, fearlessly walking into their settlements and requesting meetings with the reigning sheiks, which was apparently always granted.  Many of these men believed that she had a better understanding of them than anyone else in the West.
Educated at Oxford, Bell (beautifully played by Nicole Kidman) was very intelligent, but unlike most women in that age, was determined to navigate her own life as she pleased.  She single-mindedly pursued her goals, bristling at any male attempts to rein her in.  She could easily be an inspiration to women everywhere even today.
It appears that Herzog as writer and director of the film needed to add very little to the script that was not based on facts gathered from Bell’s books and personal correspondence.  Her written observations of the people she met, her photography, and her varied experiences provide rich information for the screenwriter and cinematographer.  Herzog has used Cinematographer Peter Zeitlinger for many of his movies, and the man has once again proved his worth with photography that is eloquent in its palette and the camera’s curious eye in navigating the terrain outdoors in the desert, within the tribal settlements, and in the cultured drawing rooms of British aristocracy.
I found this to be a fascinating journey, particularly in light of current conditions in the Middle East and certainly in presenting the rare woman who could navigate her way in some of the most masculine-dominant situations.  Was she just lucky?  I think not.  There were far too many risky encounters for it to be that; she was canny, honest, forthright, and a skilled negotiator in getting what she wanted, while still maintaining respect for whoever was on the other side of the negotiation.
Kidman seems just right for the role, and her playful flirtations with Henry (Franco), a character patterned after someone else Bell was involved with, add a little fun and romance to the story.  Bell’s later involvement with British officer Wylie (Lewis) doesn’t have the same chemistry, but is still entertaining.  Her interactions with archeologist T. E. Lawrence (Pattinson) capture well their mutual cynicism about British government decisions.
Queen of the Desert presents a necessarily abbreviated but empathic account of a phenomenal woman in the beginning of the 20th Century who forged a path that is unique for women. Going where few or no others had dared to tread, Gertrude Bell came to know herself and what was important to her in her isolated travels in the Arabian Desert, which might seem secondary to the valuable connections she was making and information she was gathering about a mysterious culture.  In the history of women, however, it is groundbreaking.
It could be criticized for skimping on the political information and negotiations Bell conducted, but I think that is in favor of the cinematic photographic sweep and focusing on Bell’s personality.  It’s classic Werner Herzog.

A delight to see a woman of action being so successful.

Posted by donnarcopeland at 12:31 PM