HOW TO BE A LATIN LOVER 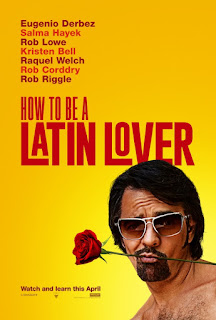 There are not many films with lovers 25 years apart in age—that is, with the man being younger.  But How to be a Latin Lover has not just one but two such couples.  Maximo (Derbez) walks and talks like he is God’s gift to the world, comfortably ensconced in his wealthy partner’s mansion, with maids running after him serving his every whim and constantly cleaning up his clutter.  He’s been a bit thoughtless in marking his anniversary, so impulsively buys her a sporty car, charging it to her account.  It doesn’t dawn on him that her knees wouldn’t allow her to sit in it, so it turns out to be a car for him.  But…to his shocking amazement, since he thinks she doesn’t notice his lapses, she quickly falls in love with the car salesman (Cera), and he is kicked out of her life.
Maximo is in his late 40’s and has never worked a day in his life, so what to do?  Suddenly, he’s back in his modest childhood days when he calls on his sister Sara (Hayek), who doesn’t want to see him (they are estranged because he hasn’t bothered to keep in touch or even attend their mother’s funeral), but she grudgingly allows him to stay with her and her son Hugo (Alejandro) in their small apartment temporarily.  Maximo’s years of being indulged and not having any responsibility gets him into one awkward situation after another.  He knows nothing about family life, so devalues his relatives, seeing them only as means to an end, i.e., finding another sugar mama.
He tries to get help from one of his friends (Lowe), who has a similar arrangement with an older woman (Lavin), but the two men get into a brawl when one betrays the other—another scene that is supposed to be hilarious.
Most of the story deals with the bizarre premise that Maximo can guide his sister (an attractive widow who hasn’t dated in years) and naïve nephew smitten with his 10 year-old classmate) in the art of seduction.  But this is the one (only) thing in which he is an expert, and in the process of helping others, he finds the value of family.
Significant mishaps occur along the way, with a script intended to be funny, and indeed, the screening audience did get a big kick out of it.  My own impression is that except for the young-men/old-women twist, not much is novel or particularly funny in this film.  It is the same tired theme of the infantile man somehow achieving his goals without earning them in honorable ways.  His only redemption in my eyes is his realization that he has let his nephew down and then tries to make up for it in a touching, meaningful way.
How to be a Latin Lover has a good cast, and the director, Ken Marino, has created a particular kind of comedy that makes people in the mainstream laugh, but leaves those of us who want more substance, hungry.

Hard lessons for a Latin lover to learn

Posted by donnarcopeland at 12:46 PM