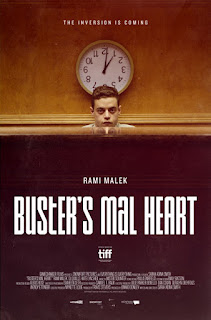 Writer/director Sarah Adina Smith’s surreal production could only succeed with the force of Rami Malek’s portrayals of odd characters (e.g., Mr. Robot) who can mysteriously transform himself into different personas ranging from everyman to psychotic man.  Here, he is at least two characters—one, a restless night clerk at a hotel who is frustrated with a job beneath his intellect; and the other, a deranged “mountain man”, fleeing from the law after a traumatic event.  There is a lot to fill in between these two appearances, and it’s not always clear exactly what is transpiring.
Smith jumps back and forth in time (which I nearly always hate, but her aim here might be to keep the viewer guessing and slightly disoriented to identify with the star’s predicaments), so that we see Jonah happily married to Marty (Sheil) and reveling in his precocious daughter Roxy (Potter), but he’s feeling stifled and bone-weary from his job.  His social/political views help fuel his anger.  The family has moved in with Marty’s parents to save money for a plot of land in the country, and this is clearly stressful for all, and what brings Buster to the brink is the dawning realization that they may never fulfill their dream.
One night at the hotel, a mysterious man (DJ Qualls) asks for a room, but refuses to give any ID or even a name.  He easily engages Jonah into conversations about a coming apocalypse called an “inversion”, heightening his anxiety and further prompting Jonah’s existential/political questions.  Eventually, Jonah tries to get rid of the man, and thinks he has, but…
Other times, we see Malek as longhaired bearded “Buster” roaming around in the mountains, breaking into vacation homes, and running from the sheriff and his deputies.  Smith leaves us guessing here, as well as at other times, as to which scenes are hallucinations and which are real.  At times, I even wondered whether the Qualls character might be another of Jonah’s personalities.
Buster’s Mal Heart is intriguing, fortified by Rami Malek’s performance in television’s “Mr. Robot.”  Similarities between Jonah (“Buster”) and Mr. Robot are enough to enhance this production’s already fascinating value.  DJ Qualls gives the right amount of creepiness as the mysterious hotel guest to rev up the mystery.

Drama with tinges of humor morphs into a mystery/thriller.