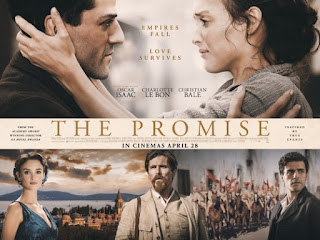 The Armenian apothecary Mikael Pogosian (Isaac) has aspirations to become a doctor. With his parents’ encouragement, he is betrothed to a young woman in their village.  Her dowry will pay for him to get his medical degree in Constantinople, which he calculates will be two years, after which, he will return and marry his sweetheart.  Hence, the title, The Promise; little does he know what (individual, country, international events) will threaten that pronouncement.
He’s doing well in his studies and makes friends with a fellow medical student who introduces him to a couple of his friends and they begin sampling the nightlife.  Chris Myers (Bale) is an American reporter writing stories about the war, and his girlfriend, Ana (Le Bon) is a tutor for the children of Mikael’s uncle.  She is Armenian like Mikael, and that serves as a bond between them.  Against their will—certainly Mikael’s, but also because Ana is unsure of Chris—the two develop an attraction for one another, and the love triangle will be interspersed into the story, which is mostly about the persecution of the Armenians.
This juxtaposition of the triangle and the sieges against the Armenians has been criticized by critics of The Promise; but I liked having a human interest story for relief from the extremely brutal, merciless attacks that constitute most of the plot.  The interactions among the three are deftly presented, and don’t follow the usual outcome of such relationships—something else I appreciated.  Although, granted, the passion shown between characters at times is unbelievable under the circumstances.
When the Ottoman Empire joins the Central Powers against the Allies in WWI, they simultaneously step up their attacks on the Armenians.  Religious hatred, animosities, and purges had been occurring for centuries in the region, and the Ottoman leadership is now deciding to systematically get rid of all Armenians.  (One and a half million of them were massacred during this period of time.)  Through a chain of events, Mikael’s medical student friend is conscripted into the military and Mikael is put in a slave labor force building a railroad.  After a chance accident, he escapes and heads home to his parents, realizing that they are now in danger.
Much horror transpires, and Mikael, his family, and his friends are drawn together in a bloody conflict against the Ottomans.  Toward the end of the film, Ana responds to Mikael’s urge for revenge with “Our revenge will be to survive.”
This is the Armenian story, which is well worth the retelling, although it is a brutal, bloody tale.  Director Terry George and writer with Robin Swicord, bring forth an account of the fate of the Turkish/Kurdish Armenians in history that officials in Turkey are still loath to admit occurred.  The cast of Isaac, Bale, Le Bon, and Cromwell are superb in their renditions and in their sensitivity to portray victims of state government discrimination.  The music of Gabriel Yared and cinematography of Javier Aguirresarobe greatly support and enhance the qualities of this film.

Ordinary lives caught up in the drama of history.