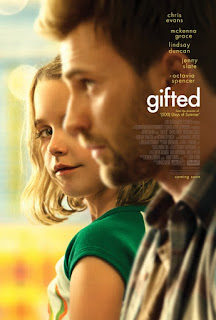 Gifted is a film for the masses in that it has charm in the form of a super-smart, sassy child; a sincere guardian who is doing his best, although he’s a bit myopic; a soulful neighbor; a sincere, sharp schoolteacher; a villain in the form of an ambitious mother/grandmother; and a plot with suspense.  It could be—and is—dismissed as a bunch of froth, but it does bring up important issues about the needs of truly gifted children and how the courts handle child custody cases.
We first get a picture of the child in a normal school (preferred by the uncle/guardian of the child in trying to respect his deceased sister, the child’s mother, who was a genius with resentment toward their mother).  It’s clear that Frank (Evans) is trying to guide his niece Mary (McKenna) in social skills, but she is only six years old and still has a way to go.  She has been home schooled previously, but is now in first grade in a public school.  After a bit of cheekiness on Mary’s part, her teacher (Slate) is confounded at first, then realizes that she has a super smart child on her hands.  She immediately talks to the principal, and of course, they recommend a school for the gifted and talented—with a scholarship.  But Frank knows from experience what his sister went through with an over-involved mother and is adamant that Mary have a normal childhood and friends.
When the grandmother (Duncan) appears on the scene, all her frustrations about her gifted daughter surface, and she is determined to take over and see that her granddaughter achieves what her daughter gave up on.  She haughtily dismisses her son and his living conditions and sues to get custody of the child.  She doesn’t succeed, and a compromise is made, but that’s not the end of the story.
Writer Tom Flynn and Director Marc Webb do a reasonably good job in illustrating the challenges of bringing up children with extraordinary intelligence.  There is a lot to be said for presenting them with experiences that will be challenging; at the same time, giving them the opportunity to have a childhood, relate to normal people, and deal with everyday problems is just as crucial.  We see a bit of both approaches in the film, which is not terribly exciting, but it’s realistic, and I think it’s helpful for the general audience to see both sides of the issue.
Part of the suspense of the film is to hear the arguments in court and wonder how custody will be resolved.  Of course, it’s not too hard to predict, but just how it happens is interesting.  Loose ends are left hanging, such as what happens to two particular people who were essential players in the drama.
Chris Evans steps out of his Captain America role to become a rather ordinary Joe, but one with a past worth noting.  Lindsay Duncan brings all her British Thespian skills to bear in playing the aristocratic grandmother, confident of her considerable resources.  Grace McKenna is delightful as the pugnacious Mary, and Jenny Slate as her devoted teacher are both entertaining.  Their interactions with Frank give the film its soul.  It’s more than refreshing to see a person of color playing an essential role in normalizing Mary’s life, and Octavia Spencer is just the ticket.  Her character gives Frank the common sense he needs for grounding.
Gifted could have probed into the child and family issues with more depth, but for its intended audience (mainstream America), I would guess that it will serve as thoughtful, meaningful entertainment. Although they may not have dealt with a gifted child, they are likely to have experienced child custody issues.  The filmmakers definitely should have omitted the romantic interludes, which are not only unnecessary, but in poor taste.

A challenging case of a gifted child caught up in a myriad of family history and dynamics.

Posted by donnarcopeland at 1:01 PM