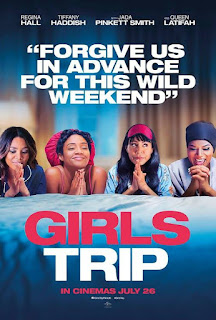 Four friends decide to get together again after years of doing their own thing.  Ryan (Hall) has become famous for her book with the message that You Can Have it All, and with her football hero  husband Stewart (Colter) they make up a golden couple promoted by their agent Elizabeth (Walsh) and looking forward to their own TV talk show and product line.        They have a public engagement in New Orleans, and Ryan thinks it would be a perfect time to get the “Flossy Posse” (partying college roommates) back together for a reunion.
Sasha (Latifah), Lisa (Smith), and Dina (Haddish) are on board and meet up for a flashy, fun weekend in the party city.  They all have back-stories, though.  Sasha has her own blog, which digs up “dirt” about celebrities, but she’s hanging on financially by only a thin thread.  Dina has impulse control problems and has just been fired from her job.  Lisa and her two children live with her mother after Lisa’s divorce.
They also have colorful personalities, all very different from one another, and there is a certain amount of painful history that surfaces from time to time.  These stories are cleverly sprinkled in, so that the viewer is informed gradually.  They only come to a head towards the very end, which, to me, was the most interesting part of the film.
But the personalities are the entertainment.  First and foremost is Dina, who has no limits as to what she will do or say, which makes her the comedian/problem for everyone.  Ryan is forceful by virtue of her success in life (which is far from stable and predictable) and her message to women about being able to have it all.  Sasha looks/acts the part of someone who has made it, but something keeps coming up about her and Ryan.  Lisa seems to have traveled backward in time, and the others have to bring her up to date in her frumpy dress, her frumpy attitude, and her obsessive nurturance.
This mixture is dynamite in New Orleans where everything the filmmakers could dream up in raucous comedy, embarrassing situations, and friendship brinkmanship gets played.  To spice it up even more, cameo appearances by Common, Sean ‘Diddy’ Combs, Ava DuVernay, Mariah Carey and their groups blitz the screen.  The jokes don’t always come across well, but there are so many, one can overlook those few.
Girls Trip will be savored more by those whose culture is represented by the characters.  The audience in the screening I attended was optimally interactive, applauding, making comments, and groaning throughout.  As a white woman of a certain age, I sat through most of it interested, but not engaged, up until the concluding scenes when the characters developed more insight into their friendship and its value.  That is the substantive point of the whole film; that underneath everything, above all, is friendship.  I can certainly go along with that!
Director Malcolm D. Lee, wanting to avoid black female stereotypes, highlights the genuine warmth among the women.  They fight and argue, but not for long, and they always make up.  The four talented main actresses (Hall, Latifah, Smith, Haddish) are funny and entertaining, deftly showing off their skills.  Walsh and Colter lend strong supporting roles.

A raunchy, raucous indulgence that eventually gets to what most of us value in life.

Posted by donnarcopeland at 3:16 PM