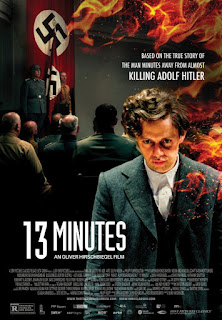 This film is a thriller based upon the life of a heroic German resistance fighter during WWII.  The story opens with George Elser (Friedel) painstakingly planting a bomb in the wall behind the podium where Adolph Hitler, his target, will be speaking.  After he accomplishes the task, he attempts to flee to Switzerland, but is stopped by border guards, who find incriminating evidence on him, and he gets arrested.
As a young adult, Elser is a musician in a small-town pub in southern Germany.  He is clearly a ladies’ man, and has that reputation among the locals.  It’s around 1932-34, and Nazi officers and party leaders are just beginning to harass people for not towing the party line and for associating with Jews.  Elser is completely repelled by their boorish behavior, and incensed by their treatment of Jews and people even associating with Jews.  By 1939, he is convinced that Hitler is going to be really destructive to people and to the country, and feels like he can’t just stand by and watch it happen.  Hence, he meticulously makes his plans to take Hitler out.  Elser is very smart and resourceful in managing to come up with all the materials he needs and how to use them.
The bomb does indeed go off and kills innocent people nearby, but Hitler had left the building 13 minutes before; hence, the title of the film. While Elser is incarcerated, he’s tortured in various ways by the Nazis to get information about accomplices (and to protect their pride; they don’t want to look foolish by being outsmarted by one man).  Hitler and his aides cannot believe that Elser could build such a bomb on his own, and bring in experts to verify his ability, which they do.  But the brass is still not satisfied, and in frustration, Elser offers to draw a diagram and answer specific questions about how he built it, which he did.  The obstinacy of Hitler and his henchmen even in the face of these facts is shown by their shocking actions toward the end of the story.
The film inserts flashbacks in Elser’s mind to fill us in on his history.  We learn that he had no respect for his drunken father, and had to return to his hometown to straighten out some of his father’s bad business deals.  While there, he met Elsa (Schuttler), who is married to a man who abuses her.  Of all the women he’s been with, she is the only one he falls in love with.  To protect her and his family, he tells them nothing of his plan, and when he leaves to go to Munich to implement it, he promises her he will return and marry her.  He was absolutely right in the secrecy, because she was brought to the prison during the interrogations.  When the interrogators threatened to harm her, he confessed to the crime and gave them all the information about it, and they released her.
Some of the more interesting segments of Elser’s imprisonment has to do with the perspective of one of the interrogators.  Arthur Nebe (Klaussner) seems to believe him, and sets limits on his torture, angering some of Nebe’s colleagues and bosses.  He will pay dearly for this later, which validates just how ruthless and vindictive the Nazis could be.
13 Minutes is very well crafted by Director Oliver Hirschbiegel, editor Alexander Dittner, cinematographer Judith Kaufmann and musician David Holmes.  The technique of using Elser’s flashbacks to give us his background story provides relief from the horrors of his imprisonment.  Also, by seeing all of his experiences, it becomes apparent how truly heroic Elser was.  He was a complicated person who at first seems rather irresponsible like a playboy, but as events unfold, we see him taking personal responsibility in trying to help his fellow Germans and his country.  It’s eerie when he predicts what will ultimately happen to Germany under Hitler, because he was right.  He showed his honor to the end, when he blames his failure on his not being committed enough to what he believed was right.
As Elser, Christian Friedel delivers an award-worthy performance in portraying a very complicated man who is transformed radically by his choices and life experiences.  Burghart Klaussner as Arthur Nebe likewise projects subtlety and range beneath a stoic façade.