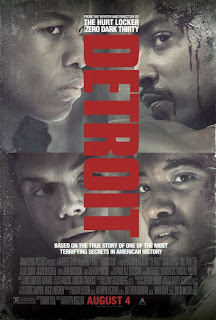 Hardcore racism is difficult to watch, especially when the offender is weak and overcompensating for it with sadistic acting-out.  Detroit puts us in the shoes of black people who have endured hundreds of years of false accusations and persecution.  When I became so disturbed watching it in the movie and had the urge to leave, it told me this is something I need to stay for, watch, and listen.
Kathryn Bigelow and her trusted writer Mark Boal give an account of the 1967 race riots in Detroit from a perspective that perhaps has never been presented before.  Its value in dramatizing it is in their bringing white people in to see firsthand what black people experience every day, and hopefully to give black people the sense a) that some of us do understand, and b) they get some vindication for the stereotypes that have been foisted on them.  Stereotypes of black people are rampant in the story, and sadly are still prominent in our society fifty years later.
The film focuses on random people getting together in the Algiers Motel on the third night of rioting.  They include a member of the aspiring vocal group, The Dramatics, and their agent, two young women from Ohio who enjoy the company of black men, their black male friend, a prankster, and a couple of his friends.  Unfortunately, the prankster has a starting pistol (for track races) that makes a pop like a real gun, which he uses to play a joke on his guests.  Then, when he looks out to see patrols on the street, he shoots it out the window, “to show them how scared we get when they’re after us.”  Little does he know that one weak officer Krauss (Poulter) will jump to conclusions, think there is an actual sniper in the motel, and proceed to locate the shooter, no matter what it takes, including planting evidence.  He has already been reprimanded by a superior for his conduct, but it doesn’t “take.”
The film portrays the rioting and looting similar to a newsreel, (perhaps deriving from real ones) showing police and politicians taken by surprise (because they had not paid attention to the growing unrest from joblessness and promises not kept), and the National Guard is brought in.  The rioting has already been going on for two days before our hapless Algiers Motel group gets drawn in by what Krauss (Poulter) hears is a sniper.  He then proceeds to round up anyone in the motel he can find who might know something, and abuse them in an attempt to get them to identify the shooter.  (Difficult, since there was none.)
I understand the story is based on reports of the events that occurred before the riot, as well as events leading up to it.  Boal and Bigelow elaborated on these accounts for dramatic effect, including the creation of the Krauss character, loosely based on an officer who was charged with a crime, but subsequently found not guilty by an all-white jury.  Some questions are not addressed, such as why none of the hostages mentioned that Carl’s gun was a starting pistol (no bullets) until they were in court proceedings.  Why was Krauss put back on the force after he had shot a looter in the back and killed him?  Why didn’t the hostages get the officer’s name?  Why didn’t people ask for lawyers when they were arrested?  Was the prosecution in the court trial really that bad?  These are minor points, and may be explained partly by the time; in 1967, the people held hostage may not have realized they could ask such questions.
My skepticism has lessened after reading Mark Boal’s account in Vulture, “Why I Wrote Detroit” http://www.vulture.com/2017/07/mark-boal-on-why-he-wrote-the-movie-detroit.html.  His sources included “the historical record”, consisting of documents, police files, John Hersey’s book The Algiers Motel, and interviews of the people involved, including Cleveland Larry Reed, the Dramatics co-founder and singer who was held captive by police officers and emotionally damaged permanently as a result.  In actual fact, three black men were killed that night and nine people were kept hostage in the Algiers Motel.
Rather than the story being character driven, Boal and Bigelow wanted to show that at times, social forces take precedence over individuals’ actions and will.  He says, “The underlying intention…was always pretty straightforward: to unpack the riot and this one incident at the Algiers from the point of view of its many participants, and thereby enable the audience to experience the events themselves.”  And in that respect, the filmmakers are entirely successful in giving viewers the sense of really being there and experiencing the horror, a horror that could conceivably be entirely true, even today.  Helplessness in an individual in such system-wide movement is aptly illustrated by the fine actor John Boyega playing a security guard who valiantly tries to intervene in the Algiers Motel, but is usually brushed aside and even falsely arrested.

The dramatization of horrific events fifty years ago that can inform us today.

Posted by donnarcopeland at 1:06 PM