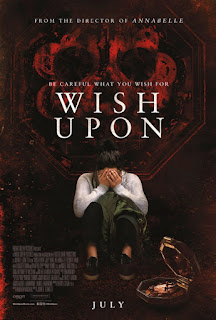 Wish upon a star?  How about an exotic Chinese box?  This film is about that box and the lesson it teaches about “Be careful what you wish for.”
As in many/most horror films, the story starts out very ordinary with a happy young girl riding her bike with her dog down the block and back.  Of course, this is just illusory; as soon as she gets home there will be a tragic surprise.
Flash forward a dozen or so years, and Clare (King) is a teenager living with her father (Phillippe), and having two close friends, June (Purser) and Meredith (Park), but not much else.  She’s bullied by the most popular girl in a high school clique, longs for the attention of Paul (Staggert) who is in the clique and doesn’t even see her, and feels embarrassed about her father emptying the dumpsters near her school where everyone can see.  Clare’s father is a packrat, gleaning things from dumpsters that he thinks will be useful someday.  He proudly brings home an ornate box that he is sure Clare will love, and leaves it on her bed as “an early birthday present.”
It is attractive, with Chinese writing on it, which Clare is intrigued with for a while, given that she is taking a class in Chinese.  She asks her Chinese teacher and fellow Chinese student, Ryan (Ki Hong Lee), about it, but they can’t translate everything; however, Ryan has a friend who knows much more Chinese and could help.  Off Clare and Ryan go to visit Gina (Alice Lee), where they learn that the box gives the possessor seven wishes…with caveats, as in blood prices.
Of course, in her discomfort, Clare makes some wishes, and lo and behold they come true.  She makes some more, and all of her troubles seem to be over.  But oh so gradually she is reminded of those caveats, which she tries to ignore, but the box is insistent.
Wish Upon is a horror movie for fans, particularly those in the teenage years.  Much is there for them to identify with and be horrified and frightened of.  I have an idea that the high school scenes are exactly true to life, showing mixtures of angst, rudeness, and superiority.  Director John R. Leonetti tells writer Barbara Marshall’s story well, divulging information gradually with touches of suspense and with special effects enhancing the mystery.  Tomandandy’s music is spot on in conveying the mood/terror of the moment.
Although Star Joey King’s performance is OK, it lacks the nuance and subtleties called for in the main actor.  Her expression seems always to be the same, regardless of what situation she is in.  I didn’t see the pain in her portrayal that the character must have felt when she realized how self-focused her wishes were and the consequences they brought about.  On the other hand, the actors playing friends June (Purser) and Meredith (Park) are much more entertaining, showing a range of smartness, insight, and humor.  They also contrast with the actor Staggert in his role as pretty boy Paul, who is rather wooden in his presentation.  Ryan Phillippe plays Clare’s father in a minor role, but competently executed.

Be careful what you wish for and its price.

Posted by donnarcopeland at 11:44 AM