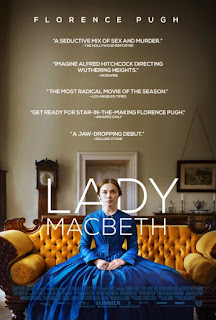 Oh, what a fine production, poetically capturing the human character so completely and mysteriously it’s transfixing to the very end.  This is more a takeoff of the Shakespearean play than a re-interpretation, but contains many of the same elements of obsession, cold desperation, guilt, and betrayal.  Except for the well experienced Christopher Fairbank who plays Boris, the husband of Katherine (Pugh), the director, writer and most of the cast have worked primarily in television, which may account for the sense of freshness.  But it can also be attributed to the novel by Nikolai Leskov on which the screenplay was adapted.
Leskov, originally from a wealthy family who subsequently lost its estate, traveled widely in Russia, acquainting himself with all kinds of people.  He was a novelist, short-story writer, playwright, and journalist.  Politically, his sympathies were with Leon Tolstoy, and his truthfulness made him a pariah in some circles, but he was admired not only by Tolstoy but also by Maxim Gorky and Anton Chekhov.  His novel, Lady Macbeth of Mtsensk District, was ignored at first but later praised for containing illuminating stories about female characters from all classes of society.
The movie opens with the young Katherine being dressed by her handmaid Anna (Acki) on what appears to be a wealthy estate.  She is married to an acerbic older man who shows no interest in her, and their bedroom scenes set the stage for the bizarreness that is to come.  Katherine is impressive in her quiet politeness and compliance with Alexander (Hilton), her husband, although she appears to be very self-possessed and even commanding with Anna and other workers on the estate.  “Are you cold?” asks Anna.  “No, I’m quite thick-skinned.”  She relishes “taking the air” by going outdoors.
While she’s out, she comes upon one of the field workers, Sebastian (Jarvis), and at first she is authoritative because he has clearly not been working, but there is something about him…and she is going to seek him out again.  A pot begins to boil, and instead of the Shakespearean Lady Macbeth saying, “Out, out, damned spot”, this Lady Macbeth will say, “Out, out, anyone who stands in my way.”  The lovers playfully quote a psalm praising a figure (the Messiah) who comes “from heaven” “to save me”, “my debt to pay.”  Will Sebastian be that Messiah for Katherine as she hopes?
The story gets embellished with the maid (Acki) becoming mute, the discovery of a ward of Boris, and multiple deaths.  It’s intriguing, comical, and suspenseful all at the same time.  Florence Pugh is a real star in evoking all the associations the viewer will have in watching her.  The film is mostly on her shoulders, and she carries it ably.  Praise to William Oldroyd and Alice Birch for bringing this innovative and captivating story to us.

Take only a peek and you won’t be able to stop watching this captivating film.

Posted by donnarcopeland at 9:26 AM