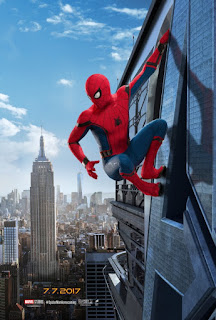 The Spider-Man series is a mixed bag, but manages to be the tenth highest grossing film franchise in history.  Homecoming is the sixth titled work after Spider-Man (2002, 2004, 2007); The Amazing Spider-Man (2012), and The Amazing Spider-Man 2, (2014).  But beyond these, Spider-Man has been a character in nine live-action films.  In the most recent, Captain America, Spider-Man assumes prominence and recognition from Tony Stark.  Homecoming is something of a follow-up story, with Peter Parker (Holland) being a nerd-like teenager who, as Spider-Man, has aspirations of becoming Stark’s (Downey) right-hand super-hero.  In this film, he has to prove himself against the doubts of Stark and his agent Happy Hogan (Favreau).  To his chagrin, he is sent back to his Queens high school and advised to stay away from heroics.
This rendition has Peter as an annoying teenager who has little recognition of his limitations but great confidence in his abilities.  While praising and even idolizing his mentors Happy Hogan and Stark, he thinks he is “good to go” in seeking out the crooks, specifically, The Vulture (Keaton), despite the cautions of Hogan and Stark.  It’s something like a coming-of-age story in which the incorrigible Parker gradually learns through his headstrong mistakes.
Homecoming is different from previous versions in Peter’s divulging his Spider-Man identity to his nerdy close friend Ned (Batalon) who is so blown away impressed, he can’t keep a secret either, creating more complications.  The villain in this production is Adrian Toomes, aka The Vulture (Keaton).  Toomes owns a salvage company that does not always stay within the law, and he is furious that Tony Stark (Downey Jr.) has edged him out of a lucrative job.  As he goes about his criminal activities, his path crosses that of Parker, who cannot resist getting involved, despite the warnings he’s been given.  There is a spectacular scene on the Staten Island Ferry, which is shown in the previews.
Tom Holland puts in a forcible performance as Parker/Spider-Man, doing as many of the stunts as he could, although he was hampered by a broken leg after a fall down stairs at home.  Director Jon Watts has joked that Holland was as excited about landing the role as his character is in getting to be Spider-Man, and it shows in his performance.  Since he is a former gymnast, he can impress with feats like back-flips on command.
Michael Keaton, Robert Downey, Jr., Jon Favreau, and Marisa Tomei are their usual pro-selves, convincing in every way.  I understand that Keaton particularly enjoyed being the baddest villain he could be.  Younger Jacob Batalon and Zendaya bring fresh spirit and talent to the group.
Jon Watts has achieved something many thought was undoable in resurrecting Spider-Man in a way that is engaging, entertaining, and sometimes surprising.  The last act has a very nice shocker in it.  Music by Michael Giacchino expertly and lyrically hits the right notes in every scene.
The movie is well done; I personally tired of seeing what I thought was much the same story in every previous rendition of Spider-Man.

An enthusiastic teen challenges Tony Stark’s patience with his gutsiness and impresses The Vulture with his nerve.

Posted by donnarcopeland at 1:18 PM