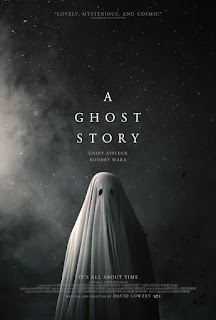 This is truly a story about a ghost, it’s thoughts, reminiscences, and perhaps regrets.  It opens with a couple named C (Affleck) and M (Mara) saying a few words, the most meaningful of which is his saying he’s tired of talking about it, and her asking if they could discuss it tomorrow, and his response is “maybe.”  (The dialog has a Terence Malick touch to it.)  The film sets a mysterious tone right away, with noises in the night, misty smoky air (soft focus used to advantage by cinematographer Andrew Droz Palermo), and a pervasive sense of agitated discomfort—not quite unhappiness.  They are clearly getting ready to move, with boxes everywhere and she hauling things out to the trash.
Suddenly, he’s slumped over after a car crash, and then we see her at the morgue, and still later on her own, with C in a white sheet with big eye holes standing over her.  She seems to go through with the planned move, after which a woman with two children moves into their house, but they don’t stay long, what with dishes flying off onto the floor and shattering.  Then we see a party in progress at the same house; it’s crowded, with buzzing conversations and couples slinking off to be alone.  One man pontificates at the table through swigs of beer about life and its uncertainties and disasters.  Next, we see the house abandoned, then a wrecker demolishing it, and an office building goes up in its place.
There are numerous indications that the ghost does not like what’s happened, and we next see him out in the country.  A covered wagon comes up, reminding us of the doomsday prognostications of the man at the table, and we think maybe we’re going back in time, or looping around to another world, another of the man’s speculative possibilities.  In the covered wagon is a man with a family, and he is starting preparations to build a house; however, we don’t get to see it finished.
In the final scenes of the film, we’re back at the house of C and M, and their marriage is recapitulated, giving us more information about their conflicts.  She moved a lot as a child, expressing her dislike by leaving behind little notes hidden just in case if she ever wanted to go back, there would be a little piece of her there.  Did she ever go back to the places she left notes?  No.  Yet, something within her as an adult likes to move different places from time to time; C doesn’t because history of place is important to him.  With this, it makes sense that his ghost is still in the house.  The story resolves in a way that makes all this a little more understandable, but the viewer is likely to remain in puzzlement.
As I thought about it, it did seem that the writer/director David Lowery (Ain’t them Bodies Saints, Pete’s Dragon) is depicting the sense of loss and the searches humans go through in trying to make sense of the world and stay connected with others, particularly after a loss.  When those issues are not satisfactorily resolved and hopelessness prevails, it’s something like “the end of the world.”  Lowery’s depiction of this experience in the two ghosts (yes, there is another ghost) is graphic and profound.
I found this an intriguing film that is almost undone by the overly long scenes, such as the opening with C and M together, the pie scene, and the pontification that can’t be easily comprehended.  The near absence of humor also makes this a slog.  Neither Affleck nor Mara—both abundantly talented actors—have enough screen time to warrant their investment in this film.

This is a ghost story without a smidgen of fear, only poetic imaginings.

Posted by donnarcopeland at 1:18 PM