AN INCONVENIENT SEQUEL: TRUTH TO POWER 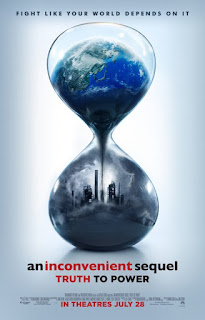 It is rather dismaying to see how little people have changed since An Inconvenient Truth (2006).  Yes, Al Gore makes a big point in this sequel to express optimism (justified, I’m sure) about the future, and certainly we can be pleased with the fact that President Trump’s pulling the U.S. out of the accords in Paris this year did not have an effect on other nations; 150 countries signed the renewed agreement to reduce CO2 emissions to the 0 point by the end of the century.   Furthermore, many U.S. states and cities have made their own resolutions to do something about climate change.
The most impressive scenes in the documentary are to see the rushing waterfalls and rivers coming off the ice sheets.  At times, it looks like ice chunks the size of boulders are tumbling down.  Also impressive and heartbreaking are the numerous places all over the world that have experienced massive flooding and drought.  Gore presents ample evidence showing that these events occur as a result of climate change in the form of rising temperatures; e.g., much of the sun’s heat energy is absorbed by the oceans, causing them to rise, and it draws moisture out of the earth, causing droughts.  From 2006-2010, much of Syria was in a continuous drought.
I had not heard of the relationship between global warming and an increase in tropical diseases, but apparently this happens because viruses and insects produce much faster as the temperature warms.
Al Gore and others stepped in when India said it had to build 400 new coal plants, and they managed to convince companies and other leaders to lend India the money to forego the plants and invest in renewable energy.  This is seen as a major accomplishment, in that India is one of the larger developing countries with high needs for energy.  Another joyful sequence was to meet the Republican mayor, Dale Ross, of Georgetown, Texas, and hear how they have achieved getting 100% of their power from renewable energy sources.
But there are still stumbling blocks in the form of huge lobbying efforts against renewable energy, like the Florida governor refusing to meet with climate change scientists, even thought Miami is the city most in danger of being submerged in flooding as the result of rising ocean levels and increasingly stronger storms.  To this date, President Trump is still expressing skepticism about climate change, and his appointee as head of the Environmental Protection Agency, Scott Pruitt, shows just as much a lack of interest in protecting the environment.
This documentary by Bonnie Cohen and Jon Shenk is good, for the most part, in showing the evidence and effects of climate change, and the efforts by Al Gore and his associates to convince skeptics of the reality.  They have tried to talk “truth to power”, and Gore has presented training sessions all over the world for people to teach citizens how to spread the word.  Shenk’s cinematography is especially good, but I think too much time was spent in filming meetings and rehashing old political battles.  The statistics are rather complex, and they would have been more powerful if the film had lingered a little longer on presenting them, maybe with clever graphics (so as not to risk boredom).

This is our world, and citizens are well advised to see the film or get information from elsewhere as to how to protect nature and ourselves from harm.