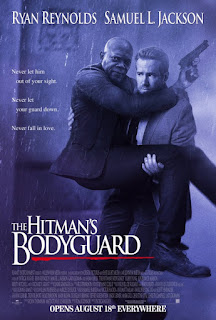 The title of this film should have been “Sound and Special Effects”, or “Videogames Onscreen”, because the sounds are so eardrum shattering and the special effects so pronounced, they drown out what little dialog there is.  There is a bit of respite(?) in Michael Bryce’s (Reynolds) and Darius Kincaid’s (Jackson) repartee/arguments, and some of these are actually funny, but they get repetitious fast.  Really, the only value in seeing this film is to witness Salma Hayek as Mrs. Kincaid showing what she is made of.  No shrinking violet she!  And her tirades are more entertaining than anything else in The Hitman’s Bodyguard.
The skeleton of the story is that Kincaid has evidence against Vladislav Dukhovich (Oldham), a ruthless Eastern European dictator, for crimes against humanity in the International Court of Justice in The Hague.  Now, Kincaid is a hitman, but the court is desperate for good evidence, so they have offered a deal to Kincaid that if he will testify against Dukhovich, his incarcerated wife (Hayek) will be freed.  [There’s a bit of romantic schlock thrown into the story:  Kincaid dearly loves his wife and will do anything to get her out of prison, even go to prison himself.  Bryce has bumbled his relationship with Amelia Roussel (Yung), and needs to make amends.]
Amelia knows that the only way to get Kincaid safely to The Hague to testify is to hire a bodyguard, namely Bryce, to get him there.  That constitutes most of the story—getting Kincaid to The Hague without Dukhovich’s goons killing him first.  Along the way, helicopters, trains, and cars will be involved in deadly explosions, impossible car races, and blasting gunfire.  Magically, when Bryce and Kincaid get separated, they always know how to find each other and show up in the nick of time to save the other.  (Of course, there is always an argument about whether each needed the other or not.)
The Hitman's Bodyguard is not bad because it’s not a good film; it’s bad because it’s a videogame (not a movie) that we’re not playing (someone else is).  At best, it is a parody of action films.  There is little character development, substantive issues addressed, or even plot.  Atli Orvarsson’s music could have been a witty commentary on the action, but it had to compete with the special effects and sound, which cancelled it out.  Plus, the music and sound effects were so intrusive at times, they drowned out dialog.
This movie had potential, but when we see that there were 30+ producers, it may be that too many hands/interests were in the mix.

If you love videogames and are more interested in action over plot and character development, you will be one to like this film.