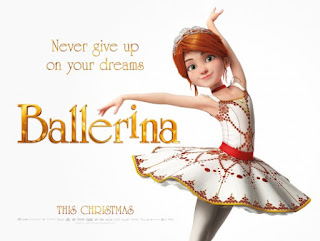 Leap! inspires viewers and has messages for children about how to succeed to achieve your dream.  Yes, you need to work hard, maybe cut a few corners (careful!), know who your friends are, have people rooting for you (but not distracting you), and cash in on a lot of luck.  And, by the way, you should be nice to people along the way.
Felicie (Fanning) grows up in an orphanage in Brittany, with memories of a mother who says, “Never give up on your dreams” and gives her a musical box with a dancing ballerina.  While in the orphanage, Felicie makes friends with Victor (Wolff), a consistent supporter with an inventive mind, and they fantasize about their escape to Paris, where Felicie can pursue her dreams of being a ballerina and Victor his of being an inventor.
After being chased by the orphanage staff, Felicie and Victor do manage to escape and make their way to Paris where each will have experiences that enlighten and enrich their lives.  Felicie will get drawn into stealing an identity and bluffing her way into the Paris ballet academy.  Victor manages to be hired by a company that appreciates his inventive skills.
But along the way, lessons are to be learned.  Because of her sense of wonder, caring, and passion for dance, Felicie gains the respect of the ballet master Merante (Scammell), and manages to trick her way into the ballet academy; but ultimately she has to prove her skills against a fierce competitor.
Leap! entertains beautifully, both in story (co-writer and director is Eric Summer with co-director Eric Warin) and visually (L’atelier Animation).  It has excitement, intrigue, and a little humor (reference to a sculpture as “the Statue of Puberty”).  I had reservations about a few things.  Most adults are shown to be mean and ugly, and two of the main characters, Felicie and Victor, adhere pretty much to stereotypical gender roles.  There seems to be at first a tacit approval of stealing, although eventually it is condemned.
The French-Canadian film can be praised for showing Felicie and Victor making mistakes, not always winning in their endeavors, and being rash.  It’s nice to see them learning from their mistakes and transforming into more admirable children.  Along those same lines, we see the ballet master Merante transform from snootiness and condescension to someone who is more objective in his judgments and more encouraging to his charges.  Ultimately, we get to witness forgiveness and support among many of the characters.  And it’s refreshing to see two competitors become fast friends.
Elle Fanning and Nat Wolff voice their characters admirably, and Mel Brooks is hilarious as Mr. Luteau, the supervisor of the orphanage.

A children’s movie beautifully animated with an engaging, inspirational story.