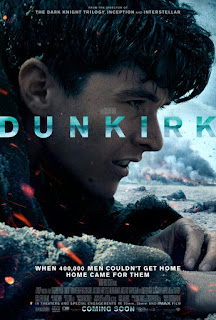 Chaos reigns in the thick of battle, which Dunkirk exquisitely illustrates.  Christopher Nolan (writer/director) knew that it was critical to show the defense and evacuation in air, on the sea, and on land, and that cutting back and forth among these arenas was essential to a realistic account of the operation.  In 1940, before the U.S. entered the World War II, Germany had separated the northern Allied forces from the French forces in the south, and hoped to wipe out the Allies at Dunkirk.  In response, the Allies came up with an ambitious plan to evacuate their 330,000 troops from Dunkirk and transport them to England.
We are there as two young British soldiers (Whitehead, Bernard) find themselves in a throng on the beach waiting for British destroyers to pick them up.  German flyers saying, “We surround you” litter the beach, which is being periodically strafed, and when the two soldiers see a wounded man on a stretcher who needs to be carried to a waiting ship, they pick him up and run toward the ship.  There is chaos, and after much difficulty, they get him to the boat, only to have the boat bombed, and they have to figure out how to survive.  Nolan will get back to them time and again.
Another arena is the air, where Farrier (Hardy) is an ace pilot on a Spitfire determined to shoot down every German fighter plane he sees.  And he sees and blasts many that we see go down and drown in the sea.
The naval officers are waiting impatiently for British destroyers to show up, but they’re delayed, and other boats loaded with servicemen keep getting blown up, with the passengers who aren’t killed by the blasts jumping into the roiling sea.
One of the more entertaining and uplifting—although also horrifying at times—segments in this film has to do with a private boat in the area requisitioned to rescue fallen troops in the sea.  The captain of this ship is Mr. Dawson (Rylance), who epitomizes the Wise One.  He rescues troops thrown into the sea, and instructs his son on board about PTSD (which had not yet been identified), boating, and simple human kindness.
Stand-outs among the actors are Rylance as a brave and noble soul, Hardy as an ace pilot who is able to convey so much even with a mask covering his face, and Murphy as a crazed pilot rescued from atop his wrecked plane in the ocean.
This is an extremely difficult film to watch, in that almost every scene is tension-filled with life-threatening struggles.  It’s not always clear what exactly is happening or what is being said by the characters.  The cinematography by Nolan’s favorite, Hoyle Van Hoytema, is brilliant in instilling a “You are there” experience in the viewer.  Likewise, Hans Zimmer’s score suffuses every scene with high emotional valence.
For a fitting coda, Nolan includes excerpts of Prime Minister Winston Churchill’s actual speech following the Battle of Dunkirk, underscoring the British spirit of never giving up:  “We shall go on in the end…we shall defend our island, whatever the cost may be.  We shall fight on the beaches, we shall fight on the landing grounds, we shall fight in the fields and in the streets, we shall fight in the hills; we shall never surrender.”

From the air, on the land, and in the sea, the battles wage on relentlessly.