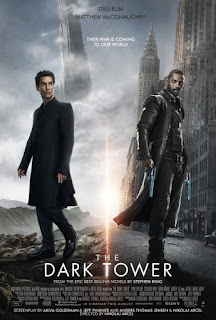 “There are other worlds than these”, says a character in The Dark Tower, based on a series of novels by Stephen King.  Apparently, this is a sequel that picks up where the novels end.  And during the film, which starts out in Keystone Earth, we’re transported to the Mid-World, another reality altogether.  First, we meet Jake (Taylor), a rather odd child who gets into trouble so frequently he’s in psychotherapy.  The reason he seems odd is that he has such realistic dreams he begins to think there is more to it.  He draws pictures of what he sees and tries to explain to his mother, his friend, and his therapist what he is sensing, but no one understands.  His mother and his friend just walk away mystified, and his therapist relates his fantasies to the father he has lost.
In desperation, his mother considers sending him to a “clinic” for the weekend, but Jake is convinced there is nothing wrong with him, and that he is simply trying to understand what his experience is telling him.  When he sees that he’ll be forced to go, and that the driver looks like someone characteristic of people in his dreams, he bolts.
Jake is clever and brave, managing to elude his pursuers, and follow clues to get to the source of his dreams.  What follows after that, is his being transported (not gently) to the Middle World, where he straightaway encounters Roland The Gunslinger (Elba) of his dreams.  Interestingly, Jake has made detailed drawings of his dreams, and Roland and Walter, the Man in Black (McConaughey), are accurately depicted.  Jake recognizes Roland immediately, but Roland has no idea who Jake is, does not want to be bothered, and really wants to get back to his business of revenge against Walter.  Jake, not willing to be thrust aside, gets drawn into the struggle, and to the film’s credit, a satisfying father-son bonding develops.
The film could have been a touching, meaningful (and sometimes it is) journey searching for a lost father.  Unfortunately, the filmmakers make it more a glorification of guns, revenge, and even sugar(!).  (Bad joke about sugar, which kids don’t need to hear.)  Jake is tutored carefully in shooting (which is not necessarily a bad thing) with mantras like, “I don’t kill with my gun; I kill with my mind.”  “I don’t kill with my gun; I kill with my heart.”  “He who kills with his gun has forgotten the face of his father.”  But the culmination of all this is a visually spectacular orgy of vengeful gunfire and killing that seems to go on forever (to me).  All this is done in such a way it made me think it was dreamed up by the NRA for an advertisement.
Instead of the gunfire, I wish the filmmakers had made more of the mind control techniques used by Jake and Roland, which, in the end, were much more powerful.  The film wanted us to think that it was the final gun battle that was the decisive victory, but how much more helpful it would be for young people to see how much their self-discipline and mindfulness could be potent, decisive forces in actualizing events.
Idris Elba and Matthew McConaughey elevate any film they are in, and they are certainly topnotch here.  The cinematography (Rasmus Videbaek) and visual effects make it exciting.  But the problem with this film is in adapting Stephen King’s work to a successful film.  Somewhere along the way, the thrust of his powerful fiction gets diluted.  The director, Nikolaj Arcel, has a fine record (director, A Royal Affair, writer, The Girl with the Dragon Tattoo); the producers are acclaimed (e.g., Brian Grazer, Ron Howard, Stephen King), and yet it seems less than.  (Could it be that gun advocates like the NRA and sugar dispensers in soft drinks exerted an effect?  I don’t know.)

This is an intriguing story based on Stephen King’s work that misses the mark.