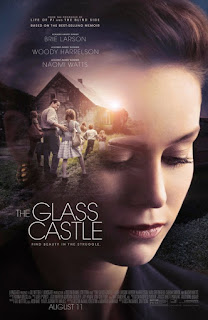 Spending two hours with a majorly dysfunctional family is a real slog.  The Glass Castle is about a family headed by a man who was abused as a child and developed views about how the world should be, imposing a chaotic lifestyle on his family in search of a dream (glass castle) that will never come to fruition.  He can be a real a-hole.  But the kicker is that the viewer is never given any evidence that anyone is standing up to this man, Rex (Harrelson), there is no “come to Jesus” moment for him, and yet we’re supposed to forgive him in the very last minutes of the film when his family has only warm memories of him.  Really??!!
The actors are the best part of The Glass Castle.  Brie Larson and the younger actresses playing her as Jeannette (Ella Anderson, Chandler Head) all perform admirably, being entirely convincing as the “parent child” who performs her parents’ jobs, is emotionally the closest to her father, and shows disillusionment every step of the way.  Woody Harrelson playing the father Rex can as an actor be riveting as a good guy (The Messenger), a bad guy (War for the Planet of the Apes), a complex guy (TV’s “True Detective”), or a comic (Wildcats); here, he is a chain-smoking alcoholic control freak with unconventional ideas about life and a violent temper to boot.  Naomi Watts as Rose Mary, the simpering mother of the family, helps us see very well the dilemma of an abused wife of an alcoholic, always excusing, and never able to assert herself and pursue her own dreams.
The Glass Castle is based on the memoir of Jeannette Walls, which was on the New York Times Best Seller List and received multiple awards.  It’s a complicated story of a girl who grew up in a family in which the parents were determinably unconventional, constantly moved around the country, kept their children close, and hadn’t the foggiest notion about good parenting.  The book should be ripe for a really fine movie rendition; unfortunately, the screenplay by director Destin Daniel Cretton and Andrew Lanham does not live up to that promise.
Although the actors perform superbly, the screenplay lets them down in plodding through most of the two hours highlighting incompetence and poor judgment.  Yes, we get that in about a half hour.  How about using the rest of the time showing more about how the two older sisters were able to move on, more about Jeannette’s relationship with her husband, and—if it really happened—events that brought Rex and Rose Mary around so that the children could (convincingly) have a rewarding Thanksgiving celebration later?
In other words, this film should have had a better last act that showed events proceeding logically (in terms of human behavior) from eccentricity and mistreatment of children to redemption.

Unless you suspend logic and realism, and don’t mind frustration, The Glass Castle is not likely to make sense.