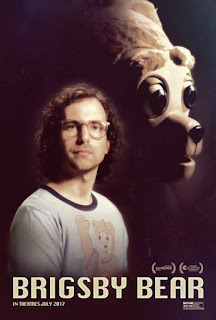 This film comes at you out of left field.  The basic story is interesting, in that a childless couple kidnapped a baby from birth, rearing it as their own.  However, they’re a bit off their rockers and keep the child fearful about the outdoors and other people, and locked in a basement, which begins the weirdness of the tale.  The next eerie part is that the father, a professor at a college, “produces” a children’s show for James (Mooney) called Brigsby.  James doesn’t know his father is producing it; he only sees the videotapes.  It goes on for years until James is a young adult, who is completely enamored of the show.  The parents even create an audience that makes it seem like the show is a major hit.
This goes on until the astute detective Vogel (Kinnear) becomes suspicious of some of the father’s actions, and discovers James’ true parents before he was kidnapped by the Mitchums.  He breaks this news to James gently and then connects him with Greg (Walsh) and Louise (Watkins) Pope.  This will be a difficult transition because James has not been out in the world before and appears to be much younger than his age, the Popes are nervously trying their best to make him feel welcome—not their daughter, who shows understandable ambivalence toward him—and James’ primary interest is in the Brigsby Bear saga.  When he finds out from his new friend Spencer (Lendeborg) that anyone can make movies, he becomes obsessed with continuing the saga on his own.  The problem with the latter is that all the props are being held by the police as evidence in the prosecution of the Mitchums.
The rest of the film is about James’ continuing orientation to the real world and his new family’s getting used to him; his and Spencer’s and their friends’ efforts to get actors and props, resulting in James’ incarceration in a mental hospital; and how all this gets worked out.
Many of the filmmakers (director Dave McCary, writers Kyle Mooney and Kevin Costello) have been associated with the television show “Saturday Night Live”, and this movie seems like an extended version of one of their skits with its fancifulness, its raw humor, and thinness in substance.  For example, the idea that someone with James’ history could suddenly become a moviemaker with a hit is fanciful.  Raw humor occurs when a young woman (maybe even a high school student) seduces him at a party, which does not end well, partly because someone gave him a drug.  Real substance is lacking, in that it’s not clear what the point of the film is (no underlying principle or thought), and there are obvious omissions, such as James—who had a very positive relationship and bonding with the Mitchums—experiences no grief in being separated from them.  It happens quickly, and he is informed by a police detective instead of someone skilled in that type of work.  There was some promise in the Popes’ engaging a therapist (Danes) to help James, but she wasn’t skilled either; she’s a typical Hollywood invention of a therapist.

Brigsby Bear is an extended Saturday Night Live skit not ready to be a feature length movie.