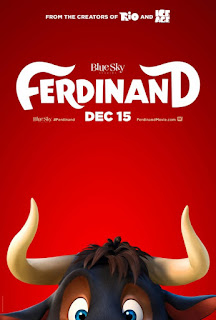 How do you tell a story about a pacifist bull?  Well, Twentieth Century Fox Animation and Director Carlos Saldanha do just that, based on a book by Munro Leaf and Robert Lawson.  We don’t know why Ferdinand (Cena) doesn’t want to fight; his father is a champion bull, but Ferdinand likes to smell the flowers—literally!  He is teased unmercifully by his peers, especially Valiente (Cannavale), a barnyard bully.  But Ferdinand is smart, and when it looks like he is going to be chosen to go to the arena for a fight, he bolts (no easy task, since the bull pen is highly secure).
I won’t say how he gets away, which is part of the fun, but he ends up on a ranch owned by Juan (Juanes), who indulges his daughter Nina (Day) in keeping as many pets as she wants.  She falls in love with Ferdinand, and they become fast friends.  He is SO happy with Nina and her father, smelling dozens of flowers on the countryside as he roams wherever he wants, and only has to contend with the testy Paco (Carmichael) the dog who is feeling like his special place has been usurped.  Ferdinand is fed and treated well at the ranch and grows to be “a beast” of a bull.
All would have been fine ever after, but Ferdinand sees no reason why he can’t accompany his new family to the annual flower market in the city.  Juan says it is not a good place for Ferdinand, and he is left behind.  Alas, he argues with himself about complying with his owner’s wishes, but ultimately decides he should go to the festival.  Once there, he is so enthralled by all the flowers, he makes some bad decisions, and thereafter the festival becomes truly like “a bull in a china closet”, because his appearance terrifies people, and in trying to get away, he upsets more than one apple cart.
This escape costs him greatly, and he finds himself once again in la Casa del Toro where bulls are trained and from where Ferdinand had just run away.  Now, we see the more mature Ferdinand taking a leadership role in trying to persuade his fellow bulls why they should resist going to the bullring.  These sequences are good for children to see how political positions are reasoned out based on observed facts.
After this, the story devolves into the contemporary popular car-bus-train chase.  (Every exciting film has to have a car chase, right?)  I didn’t get the impression the children in the audience were as fascinated by this as were/are filmmakers, but this goes on for a significant number of minutes in the film.
When the story finally gets back to the basic idea of the film, it ends on stirring moments when the concept of/reason for pacifism is shown very clearly, both in the evidence about what actually happens at bull fights, and what can go on in the ring when a bull doesn’t want to fight.  It ends in a way that preserves everyone’s pride.
Ferdinand has some very clever, funny scenes (e.g., a dance contest, of all things, between the Germanic sounding, haughty horses and the inhabitants of the barnyard at Casa del Toro), and some lines tossed out for adults in the audience (e.g., “Let’s try to Haagen-Das (hug) it out”, “I’ve fallen, and I can’t giddy-up”, and a reference to re-gifting.)  But most of its value is in modeling for children a) how to make decisions about whether to fight or not to fight; and b) showing that bravery can be shown by leadership just as much as by muscle.  Related to that, it shows how maturing in a loving atmosphere is strengthening.

This is about a brave bull who had good reasons for not going into the bullring.


Posted by donnarcopeland at 10:46 AM