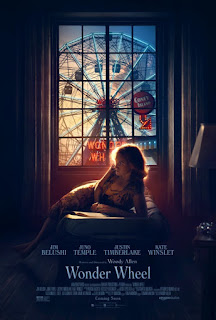 Wonder Wheel is classic Woody Allen, even to one of the characters taking on his persona (a common motif in his films).  It’s his typical family drama in which relationships are tested and sometimes remain intact and sometimes not.  Humpty (intended reference to Humpy Dumpty?), played by Jim Belushi is somewhat down and out, but is managing to squeek by as a mechanic at the Coney Island Amusement Park.  He’s married to one of the waitresses at a clam shack, Ginny (Winslet), a chronically disappointed (with everyone and everything) woman who often appears to be doing her best, but consistently freaks out and has migraines.  One big problem is her son from her first marriage, a budding arsonist—which doesn’t bode at all well for his future.
Ginny feels trapped in her marriage to Humpty, whom she has managed to wean off alcohol, but is bored with, and has become involved with the lifeguard Mickey (Timberlake).  But everyone has to go into emergency mode when Humpty’s enchanting daughter Caroline (Temple) appears at the door one day.  Her father disowned her after she married a mobster against his advice, but now she is desperate with no place to go (her mother died), begging her father to take her in.  She appears to be very sincere in recognizing her mistakes of the past, and genuinely tries to make positive changes, helping Ginny in the restaurant (making some mistakes along the way) and taking classes.  Her father is overjoyed that she has seen the error of her ways and wants to help her continue with her education.  But tension stays high, as we learn that her ex-husband’s cronies are looking for her because she “knows where the bodies are buried.”  So her life is in danger.
Then fate seems to do its work, along with coincidences and human weaknesses.  Conflict heightens when no one seems to “get” Ginny; her husband, Mickey, and Caroline all misunderstand her in very different ways—none of them seeming to know what to do as they gain insight into her past and present experience.  It becomes a chaotic Woody Allen scenario.
The four main characters fit their roles hand-in-glove.  Belushi knows very well how to play the underdog man who has had to fight for everything he has, but isn’t the brightest bulb in the room.  Winslet is extraordinary in portraying a woman deeply disturbed who somehow manages to cope outwardly with everyday practical issues.  It’s just in the emotional areas she shows bewilderment and even hysteria, and her judgment falters.  Timberlake manages to pull off the man you both admire and become impatient with, depending on the situation.  He shows the character’s great efforts in being open and honest and still being oblivious to its consequences.  Juno Temple as the blonde, sexy, young Caroline, balances out her appearance with thoughtful consideration of those around her, and has clearly learned from her mistakes.  She is the most interesting character, showing adaptability to change and the only one not blaming others for her mistakes.
The production is weakened by 1) appearing too “stagey” at times (you could swear you’re watching a play); 2) including the part about Ginny’s son withD psychological problems (which doesn’t seem to fit in the story and is left completely unresolved); and 3) by replaying standard Allen themes.  I though it ironic when Ginny, starting to feel suspicious, grills Caroline about whether Mickey took her hand, touched her, or kissed her. She is obviously over-reacting, but in view of the current news stories about powerful men preying on younger women, it’s an odd thing to include in a current film.  Because of Allen’s own family situation, one wonders upon whom he is basing the Ginny character.
On a more positive note, the music—which I assume are jazzman Woody’s selections—captures so well the mood of each scene, especially the views of the amusement park and the merry-go-round.  The music merges with the story and lifts the movement of each scene.  Cinematographer Vittorio Stararo’s camera and palette elevate the production artistically.

Posted by donnarcopeland at 11:47 AM