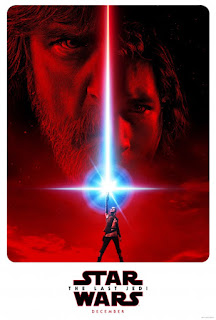 Not many films and filmmakers can keep up the momentum that the two space fantasies Star Wars and Star Trek have, and in this eighth sequence of Star Wars, writer/director Rion Johnson proves that this franchise is still good to go.  He does a good job in preserving and renewing beloved themes and images while introducing new ones that point toward the future.  We see two of the original characters, Luke Skywalker (Hamill) and Princess Leia (Fisher); and new interactions between Rey (Ridley) and Kylo Ren (Driver)—both introduced in the last episode, The Force Awakens—set up so that we know they will meet again.
The Last Jedi opens with an attack on the Jedi resistance forces, which now consist of only 400 fighters on three ships.  The story will shift back and forth between attacks from the Jedi’s arch enemy, the First Order, commanded by General Hux (Gleason) and their own attacks, commanded by General Leia Organa, upon the First Order.  General Hux must answer to the supreme leader, Snoke (Serkis), who initially denigrates him for his failure to stop the destruction of some major artillery.
Meanwhile, Rey, who finally located Luke Skywalker on the planet Ahch-To in the last picture, revisits him with the message that his presence in the battle is critical for the survival of the Jedi.  He has been coming to the philosophical conclusion that the survival of the Jedi is not that important, so her job will involve many hurdles, meditations, and encounters.  Will she convince him to go?
There are additional scenarios and encounters to keep the story intriguing, like the relationship between Finn (Boyega), Rey’s missing co-pilot, and Rose (Tran) a mechanic with impressive knowledge and skills; Poe (Isaac) and whoever is in charge of the Jedi at the time; and the triangle of Snoke (Serkis), General Hux, and Kylo Ren.
It’s not all drama; there are many scenes that make the audience laugh out loud, like that with Chewbaca and the bird-like creatures, the Porgs; the trip through the casino planet and recruitment of the code-breaker DJ (Del Toro); and Poe’s hacking into the First Order’s communication system.
This episode in the Star Wars saga boasts a huge cast of talented, actors already famous for other roles and for previous Star Wars productions:  Mark Hamill (still packing a punch of the rebel Luke Skywalker; Adam Driver (writhing under the struggle within himself about identifying with the dark side); Domhnall Gleeson [reveling in his shaky command of the First Order, which is threatened by Kylo Ren (Driver) and, ultimately by Snoke himself (Serkis)]; Oscar Isaac, the “trigger-happy” Poe trying to influence the Jedi leadership of General Leia and Vice Admiral Holdo (Dern); Benecio Del Toro emerging in the casino to volunteer his hacking skills as DJ; and, finally, the funny, flirting, techno skilled interactions between Finn (Boyega) and Rose (Tran).
The star, Daisy Ridley, has held onto her success in capturing the previous role of Luke Skywalker in the Jedi forces as Rey, a fearless, persistent, cheeky young woman who is relentless in pursuing her goals.  This involves her own personal exploration (who she is, where she came from) as well as perfecting the art of The Force.
Star Wars fans are likely to be jubilant over this production that seems to have preserved much of the character of the previous films and ventured into new territory, all while keeping the elements of surprise and humor.

Rion Johnson’s production appears to cover all the bases for fans in its preservation of the beloved, surprising twists and turns, and comedic bursts.

Posted by donnarcopeland at 10:36 AM