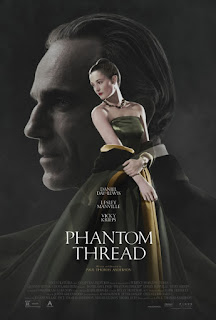 Paul Thomas Anderson (There Will be Blood, The Master) likes to explore the psychology of people and how types react to one another in relationships.  In the case of the two main characters in Phantom Thread, the power and dependency needs of each are woven into the fabric of their relationship.
It begins when couture dress designer Reynolds Woodcock (Lewis) catches sight of a waitress named Alma (Krieps), something not predictable from what we have come to know about him, and which is another instance of Anderson gleefully heightening the intrigue.  Reynolds is precise in every way, pretentious, and strongly opinionated about his surroundings.  His clients idolize him.  His attraction to Alma is unexpected, since she is rather clumsy, warm, and from a lower class of society.  But she is maximally compliant—at least in the beginning—and one can see he has fantasies of molding her into his ideal woman.  What he doesn’t see at first is a woman who has a strong need to control, particularly when she is pushed.  What she doesn’t see at first is his infantile reaction to rejection that temporarily incapacitates him.  What we don’t see initially are the forms their relationship will take across time and the eventual outcome.
Complicating the picture is Reynolds’ sister Cyril (Manville).  The two established The House of Woodcock, a couture business years before, and both live in the house where designs are created by Reynolds and sewn up with the help of female employees.  Their mother taught Reynolds his art, and he keeps her within his heart and mind, still missing her long after her passing.
Phantom Thread is beautifully filmed by writer/director Anderson as cinematographer (although he says it was a team effort) with an award-winning crew (Mark Tildesley, production design; Veronique Melery, set design; and Mark Bridges, costume design), set in London’s couture world in the 1950’s.  The designs Reynolds creates may not be to everyone’s taste, but watching him and his staff create them gives a sense of the passion in the art of design.  Jonny Greenwood’s score is inventive in its expression of the drama ongoing in every scene.
This work is purportedly Daniel Day Lewis’ swan song, and he puts his whole being into it, swaggering when Reynolds is on top of his game, looking like he is going to die any moment in some scenes, curling up like a wounded baby in others, and in still others courting his lady in the most unusual—but usually appealing—ways.  Lesley Manville as his sister can be cold as ice, never shows much emotion at all except disapproval, but clearly comes across as a mother-substitute to her brother.  Vicky Krieps manages to pull off a servile persona when she needs to, to get what she wants, then shows a cunning, precise calculation that was never apparent in her waitress job.  One of the funniest—and most descriptive and strangely predictive lines in the film is, “What a model of politeness you two are”, observed by Reynolds to his sister after an interaction between the two women.  We should be seeing much more of Krieps after her success in this film.
Phantom Thread is more likely to appeal to viewers who relish its informed psychology of human relationships and families.  Its slower pace in the beginning is meant to establish the context and inform about the main characters, and it has depth in this sense and in the points Anderson wants to get across; but it is also very funny, sometimes with dark humor and sometimes just goofy.  Others may enjoy it simply as a British period drama depicting haute couture in London in the fifties.

If you are a Daniel Day Lewis fan, take heed; this is likely to be his last.  And Paul Thomas Anderson gives us a fine production in which to highlight talents of the two collaborators.

Posted by donnarcopeland at 3:33 PM