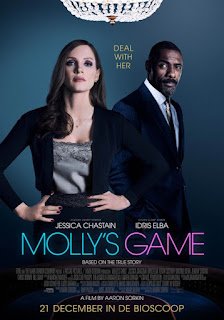 This is one of the few, or only, major films showing a female character who is strong, cheeky, brilliant, daring, and successful, and who chooses an honorable path regardless of the consequences.  Often, we see a film showing men in that position, but not women.
Molly Bloom (cunningly played by Chastain) is a cheeky woman brought up by her sports-obsessed father (Costner) to compete to the death on a ski slope; he’d had great success with her older brothers.  When she was 12 years old, after major surgery for scoliosis and doctors’ recommendation not to ski again, she went on to compete in the Olympics as part of the U.S. team.  Bad luck came in the form of a small piece of pine embedded in the ice slope, which ended her skiing career forever.
Nevermind.  This is a woman of many talents and formidable determination.  She’s set to go to law school, but against her father’s wishes, she chooses to move to Los Angeles from Colorado and find “temporary employment” as a waitress in a nightclub and as an office assistant, just for a break.  Her employment as office assistant turns into a 24-hour a day job for Dean Keith (Strong) who runs a gambling casino in the Cobra Lounge.  Molly is nothing but smart, and quickly learns everything she can about poker; moreover, she draws up spreadsheets (something Dean has never heard of) showing the bets, wins, losses, and financial information.
When Dean sees how much she is making as his assistant, he tries to stiff her (as will another character later on, both planning to do an age-old con on a woman), but she is already ahead of him and opens her own place of business.  Keep in mind that all along, Molly takes great effort to see that her business is legal and above board.  She is circumspect in not indulging in many of the activities men in her position have a history of doing.
However, the money is so good, and she takes a few risks in cutting corners.  But she is back on track toward her goal of enrolling in Harvard Law School when she is arrested by the FBI.  This brings her in contact with Charlie Jaffey (Elba), a high-priced, circumspect lawyer who doesn’t regard her as rich enough or ethical enough to warrant his law practice.
Their interactions and conversations are quintessential Aaron Sorkin—fast-paced, erudite, and funny.  Molly has to convince him to take her on as a client with drawbacks that are against his standards of practice as well as money.  That’s when the film takes on the elements of a thriller and an inspiring life story.
Chastain brings her considerable talent to this role, most likely reinforced by the nature of the character’s challenges and struggles.  It’s another victory of brains and ethical grounding winning out over masculine pride and ego, including those of a psychologist-father, who took many years to understand how much grit she had and how much like him she was.  Chastain tackles the role as she always has in grasping all the elements that make up her complicated character.  Idris Elba is just as much master of his role, and the two of them make an excellent pair in shaping the action.
This film should be an inspiration to women aspiring to achieve success and to men who want to understand these women in a non-stereotypical manner.

A refreshing and different take on a crime thriller.