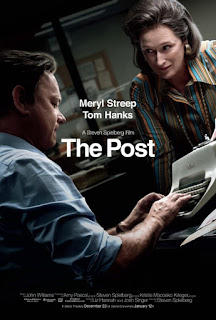 Steven Spielberg’s production of The Post, based on true events and smartly written by Elizabeth Hannah and Josh Singer (Spotlight, The Fifth Estate), is as exciting and tension filled as a good mystery story.  (I was glad I knew how everything turned out, so I could relax a bit.)  It’s about the time Daniel Ellsberg, a military analyst employed by the Rand Corporation, released classified information to the New York Times, and then to the Washington Post, about the complicity of four U.S. Presidents (Truman, Eisenhower, Kennedy, Nixon) and their administrations in covering up significant U.S. operations during the Viet Nam War.
The Post refers to the Washington Post newspaper, which obtained classified documents after the New York Times broke the story.  The dilemma Publisher Katherine Graham (Streep) and Editor Ben Bradlee (Hanks) face after the government has already initiated legal action against the Times, is whether to publish information that came to them from the same source, Daniel Ellsberg (Rhys).  These are papers reporting on a study requested by the Secretary of Defense, Robert McNamara (Greenwood) about the progress of the Viet Nam War from 1945-1967, and document the U.S. Government’s complicity in covert operations, rigging elections, and lying to the Geneva Convention, and then covering it up, essentially lying to the American people about the Viet Nam War.  Most egregious of all, is its sending young servicemen into battle for a war they knew couldn’t be won.
There are numerous aspects of the story that the filmmakers highlight, which are relevant today.  First and foremost is the issue of the need for government secrecy versus freedom of speech.  At the time, President Nixon was so incensed about the actions of the New York Times, he sought legal action against it.  Some of the more clever scenes in The Post are views through the Oval Office windows of Nixon talking on the phone and making his threats.
Another theme I appreciated is a picture of how women were regarded during that era, and another of the film’s highlights is how Katherine Graham is treated by men, even though she is the wealthy publisher of a major newspaper.  Her editor somewhat grudgingly gives her respect, as does Defense Secretary Robert McNamara who is a personal friend, but others clearly think she is out of her element in making major decisions, when—in fact and in retrospect—she is highly qualified.  When push comes to shove, she and Ben Bradlee are shown to be brave and heroic at considerable personal risk.
Steven Spielberg directs a masterful work based on a true story, but with the intrigue and excitement of a fictional drama.  The cast is outstanding, highlighted by Meryl Streep as Katherine Graham and Tom Hanks as Ben Bradlee.  Their conversations are as enlightening as they are interesting.  Bob Odenkirk, Tracy Letts, Bruce Greenwood, and Matthew Rhys providing superb acting support.  Sarah Paulson as McNamara’s (Greenwood) wife shines in her argument to her husband about the greater bravery shown by Graham at a time when he is feeling besieged.  It was rewarding later to see that he listened to her and at a later time gave Graham credit.

Get informed about a critical event in U.S. history while enjoying an exciting drama.

Posted by donnarcopeland at 3:12 PM