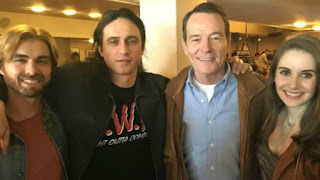 What a quintessential James Franco production!  Is there anyone else who could take a cult film like The Room, duplicate parts of it, and then make it his own?  Beyond that, it rings so many bells as you watch it, beginning with its star, Tommy Wiseau (J. Franco), an oddball character who makes you smile and turn away at the same time.  A clown-like figure, he lives in his own world, and has enough resources that he can pull everyone around him into his reality, and is genuinely hurt when they start backing off.  It’s a bit sad, too, that everyone stays with him so long as they’re getting a paycheck.  But he retains one loyal friend.
The story is about the making of a film called “The Room”, which is written, directed, produced, and acted in by Tommy.  (Keep in mind, The Room is an actual film that tanked, but later became a cult classic.)  This story is based on a memoir written by one of the film’s protagonists, Greg Sistero.  So The Disaster Artist is a bit about Gregg (D. Franco), who is an aspiring actor who lives with his mother.  He manages to strike up a conversation with a classmate he admires in his acting class, hoping to get his advice.  Tommy surprises him by instantly taking a liking to him and inviting him to room together in Los Angeles where he has an apartment.  Neither has much luck in scoring roles, so Tommy decides he’ll write his own script, casting the two of them as characters.
The rest of the story is about the freewheeling production of the movie, with Tommy being the most unpredictable factor.  It remains a mystery as to how he has the money to finance the film, or even where he is from or how old he is.  In addition to James and his brother Dave, the cast includes Seth Rogen, Josh Hutcherson, Alison Brie, Zac Efron, Kristen Bell, Megan Mulally, and others, with cameos by Brian Cranston, Adam Scott, and Judd Apatow.
Despite James Franco’s talented acting here, this is something of a “nothing” movie that will leave many viewers cold; although, granted, many find it a hoot and have thoroughly enjoyed it.  I’m in the former camp; although I enjoyed the performances, it seems pretty senseless to me.

The remake of a cult movie that is intended to be funny, but isn’t very.

Posted by donnarcopeland at 12:56 PM