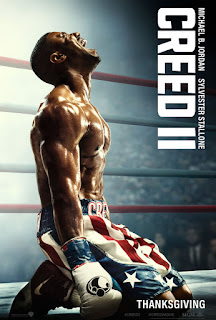 Pride goeth before a fall, but that doesn’t mean you can’t pick yourself up and fight even harder, which is just what Adonis/Creed (Jordan) does in taking up the gauntlet to avenge his father’s death at the hands of Ivan Drago a Russian heavyweight.  Creed feels pressure within himself to take on the son of Drago, Viktor (Lundgren) and defend his world championship title.  His longtime trainer and the one who had defeated Ivan Drago 30+ years before, Rocky Balboa (Stallone), sees Ivan’s physical advantage, and presses Creed to search within himself for the reason he wants to take on the challenge.  Rocky is not up to training him (he is still battling leukemia), so leaves that in the hands of Little Duke (Wood Harris).
In addition, there are other important things going on in Adonis’ life, and these, along with his own personal challenges, enrich and complicate his life. He’s involved romantically with the lovely singer Bianca (Thompson), who is a huge support to him, but also has aspirations for her own career.  She would like to move from Philadelphia to California for that reason, and points out that Adonis’ widowed mother Mary Anne (Rashad) lives there. The introduction of real-world considerations marks a plus for Creed II; it’s not just about heavyweight fighting, but reflects as well the kinds of considerations and dilemmas contemporary families have to face in deciding such things as where to live and whose career takes precedence at what time.
Over and over, screenwriters Sylvester Stallone and Juel Taylor, have the characters wrestle with parenting, family issues, and emotional attachments.  These scenes are not simply “tacked on”, but are well integrated into the primary action of the story.  (And are definitely a saving grace for this reviewer who has an aversion to boxing because of potentially life-changing injuries.) Relationships between Creed and Bianca, Rocky, and his mother; between Viktor and his father Ivan; and in the ring between Creed and Viktor Drago are rich with emotional valence.  And the bitterness Adonis experiences during one period is palpable.
Michael B. Jordan has proven his skill in Fruitvale Station, Creed (2015), and Black Panther, and lives up to that reputation in this film.  Sylvester Stallone comes across as an anchor, not only for his parts in the Rocky and Creed films, but as one for Adonis in this film, Creed II.   I get the impression he has provided much of the heart that is a part of the series.
One aspect of the film that detracts from its freshness is the predictability of the storyline.  Almost from start to finish, the viewer can guess what’s ahead.  If that doesn’t bother you, and if you like to see physical struggles against extreme adversity, this might be the movie for you.

This film is for devotees of the Rocky and Creed series of heavyweight championship films.

Posted by donnarcopeland at 9:18 AM