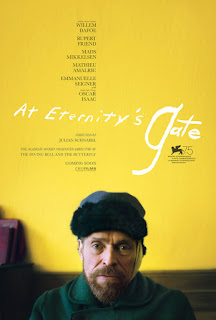 This artistic, painterly film created by painter/director, Julian Schnabel (The Diving Bell and the Butterfly, Before Night Falls, Basquiat), reverberates in its portrayal of the essence of Vincent van Gogh and his internal experiences and stated intentions to bring nature and life to people through his art.  In defending his approach to Paul Gauguin, who is critical and lectures him about how he should paint, he retorts that he goes outdoors to paint because ‘the essence of nature is beauty.”  He is always trying to capture that beauty, thinking that he and others can always learn from it.
As shown in the film, van Gogh leads a tortured life, always questioning himself and his brother Theo about whether his art is really good.  Despite his brother's reassurance, others are frank in telling him it is not; “It’s ugly”, declares a priest.  Beyond these doubts, van Gogh worries about his sanity, saying that people tell him later what he has done, but he doesn’t remember.  Moreover, he confides to his brother that he has hallucinations.  Townspeople find him strange, and he admits that he is always alone, sometimes not talking to anyone else for days.
Vincent’s nurturing brother, Theo, pays Paul Gauguin, a friend of Vincent’s to go to Arles, France, and stay with him, thinking that Gauguin will be a positive influence on him.  And apparently he is, and it proves to be a productive time for both artists; but after some months, Paul tells Vincent he must return to Paris to attend to his own career.  This sends Vincent into such a tailspin, he cuts off his ear.  The event, along with his alcoholism and at times irrational behavior, results in psychiatric hospitalizations, which seem to be helpful.  But he continues his prolific painting throughout his confinements.
The care with which At Eternity’s Gate was made is truly impressive, such as Schnabel teaching Willem Dafoe, the star, how to paint so he could give an authentic representation, Dafoe soaking up everything he could learn about van Gogh (e.g., running through the fields, with cinematographer Benoit Delhomme tracking him), and capturing his mood swings, social awkwardness, and sincerity.
Dafoe—always a good actor (most notably in The Florida Project last year)—probably gives his best performance to date in conveying with subtlety and grace the intricacy, shading, contradictions, and volatility of an artistic personality, all the while conveying the absolute sincerity characteristic of van Gogh.  Its authenticity comes through to me in my past experience in working with people who were in a psychiatric inpatient service.
Oscar Isaac’s optimistic presence as Paul Gauguin gives a welcome air of freshness to the production, and his performance is right on.  Mathieu Amalric as the psychiatrist-friend who is the most helpful to Vincent conveys just the right amount of empathy and astute inquiry.
This film is noteworthy in its artistic approach [most frames are teeming with artistic touches, such as blurring or pulsating the image (Benoit Delhomme, cinematographer) to the beat of the music by Tatiana Lisorkaia], its emotional and social valence, and historical elucidation.  It will not appeal to everyone, but will certainly be a hit with the art house crowd.

A film that captures the agonies of van Gogh’s life, along with the regret we all feel that he never received the validation he so deserved while he was alive.