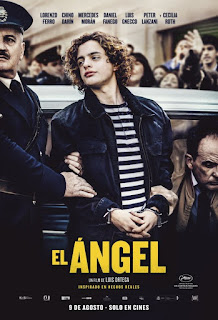 This movie is Argentina’s submission for an Oscar in foreign film.  It’s based on the story of a young criminal in the 1970’s, Carlos Robledo Puch, who started out as a “house cat” (someone who enters empty houses without a gun and takes things), then evolved into a ruthless killer, who has now spent more than 45 years in prison.
As dramatized in the film, we see Carlos (played by novice Lorenzo Ferro) portrayed as an angelic, baby-faced boy with full, alluring lips and blond curls that make him look innocent and trustworthy, but lies easily slide out of his mouth without even a flash of hesitation.  When asked by his mother about things he’s brought into the house, like the motorcycle out front, he tells her a friend leant it to him. He’s always ready with a sensible explanation for any question by anyone.
Curiously, these sociopathic characteristics are mixed in with something like a conscience.  When asked by an older woman if he would like to sleep with her, which he looks like he would, his reply is, “No, I like your husband.”  Another time, someone asks if he has stolen anything from a house they just visited, and he says, “No, he asked me not to” (which the man actually had).
When he’s in high school, Carlos wants the attention of a fellow student, Ramon (Darin), who has rebuffed him.  But we see Carlos’ charm working on Ramon, and before long he finds out that Carlos is a thief.  “You’ll have to meet my dad, then”, says Ramon.  His dad Jose (Fanego) is an ex-con who still does “jobs.” Jose introduces Carlos to guns—a thrilling experience—and the three become a small ring.  But there is conflict right away, because Carlos is shown to be reckless.  He thinks it would be a great idea to rob a gun store.  They stake out the place, Carlos goes in while the other two wait outside, and brings out a large haul; still then insisting on stretching their luck by going back in and picking up ammunition, which he had forgotten.
Later, both Jose and Ramon caution Carlos about his behavior, but it has little effect on him.  He and Ramon become close friends, merrily doing jobs together, sometimes with Jose, and amping up the violence.  After a time, as a result of one of his friendships, Ramon gets aspirations to become an actor and give up thievery.  Before very long, tension builds up, they become a bit estranged and do jobs with another ne’er-do-well, Miguel (Lanzani), and things become even more violent and conflicted.
As interesting as this film is, there is a problem, which is that no connection is made between Carlos’ background and his early onset sociopathy.  Since it’s based on a true story, the filmmakers should have inserted a few details about the real killer’s background that would give some accounting for his personality.  As it is, the message seems to be that a kid with law-abiding, honest parents could turn out to be a killer.  This doesn’t fit with what we know about criminals.
In fact, having the character say flatly, “I was born a thief”, suggests such a thing simply happens for no reason.  We do see that when newspapers report on a heinous crime, they inevitably find people who say, “He seemed like such a quiet, nice kid”, but then later we learn there are some traits/behaviors that makes their criminality more understandable.  Antecedents to criminal behavior have been well documented, and researchers have found significant associations between childhood abuse and adolescent and adult criminality.  So it makes no sense to me that Carlos is shown to be brought up under very good circumstances, with no evidence of neglect or other kinds of abuse.
I understand that the actual case is still fascinating to the Argentine public, and that El Angel was a box office hit there. It seems to me the film plays on the public’s admiration of lawlessness, which is troubling, in that the real Carlos Robledo Puch was found guilty of 11 murders and numerous sexual assaults.

About an angel with blond curls, but no halo.

Posted by donnarcopeland at 3:46 PM