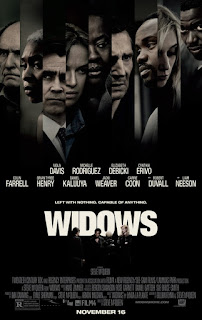 Hold onto your seat; despite the leading title, this movie will keep you on edge—and on your toes—throughout the two-hours-plus time.  Rapid cuts between love scenes and major crime in the beginning shake you and disorient you, and then you must figure out who are all the characters thrown at you in the first few minutes.
Basically, if you’ve seen the previews, you know that the widow of a slain criminal contacts the other widows of her husband’s accomplices with a plan to secure their future after she finds the notebook he made sure she would get. As happens a lot in this film with men and women, he has underestimated her feminine wiles and will.
In a role made for her, Viola Davis as Veronica uses her head after she is threatened by a rival gang, the Manning brothers (Henry and Kaluuya), who demand money from her that her husband Harry Rawlings (Neeson) stole.  Jamal Manning is determined to join the wealthy of the world, using his brother Jatemme as a fearsome hit man with no limits as to what he will do.
Corruption in city government is intertwined with criminal elements, assuring that interconnections among the characters will inevitably occur.  For example, Tom Mulligan (Duvall) and his son Jack (Farrell) are corrupt city officials who mete out city contracts to their friends.  Jack is currently running for city comptroller against Jamal Manning. All of them were well acquainted with Harry Rawlings when he was alive.
The main characters in this well-conceived plot are after the money that is now missing (burned up?) from the Rawlings caper that went down.  You will know who, if any, will end up with it only after many thrills and chills along the way.  The women occupy the stage most of the time, and actually, the men don’t come across well at all.  We see honor and care among the women who are following in their husband’s footsteps, but not in the same way.  The male characters are shown to be duplicitous, violent, and reactionary.
Writer-director Steve McQueen (12 Years a Slave, Shame) and screenwriter Gillian Flynn (Gone Girl) based the movie on the popular British television series written by Lynda La Plante of Prime Suspect fame.  With this much talent, it’s not surprising that their production is of such high quality.  No cheap thrills here, every inch of it is solid and has internal consistency and believability.  Hans Zimmer’s score and Sean Bobbitt’s cinematography provide an additional degree of excellence.
Quotable quotes:  “You reap what you sow”; the reply:  “I hope so” and “If something goes wrong, I want my kids to know that I didn’t just sit there.”

Posted by donnarcopeland at 11:10 AM