THE BALLAD OF BUSTER SCRUGGS 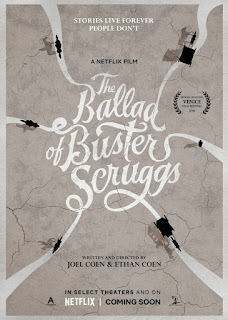 Ethan and Joel Coen have chosen to produce a western anthology containing six stories for their latest film.  Most of the main characters in each are loners, and there is at least one death in every story, but there are surprises in every one, particularly for the victims.  Characteristic of the Coens as well, humor—even if it’s sick—pops up from time to time. The music by Carter Burwell and cinematography by Bruno Delbonnel increase the artistic quality of the western stories significantly.
In the first story titled “The Ballad of Buster Scruggs”, Tim Blake Nelson is Scruggs, a singing cowboy, who receives a dare everywhere he goes.  He’s a sharp shooter who can even hit his target looking backward through a handheld mirror—which doesn’t exactly jive with his crooning talents.
In “Near Algodones”, Cowboy (Franco) looks up to see an isolated bank in Tucumcari, New Mexico, thinking it will be an easy target, especially with only one old man as a single teller.
In “Meal Ticket”, Impresario (Neeson) carries a paraplegic “Thespian orator” (Melling) through western towns to deliver poems and addresses based on the Bible and Abraham Lincoln’s speeches to the local townspeople.  The two support themselves by taking up collections at the end of each performance.  Then, the impresario discovers that a chicken might be just as entertaining.
The next two stories are the best.  In “All Gold Canyon”, Tom Waits is a prospector panning for gold.  He mumbles constantly—either to his horse or to a deity, or someone else, not sure which—but after panning doggedly for gold, he finds a mother lode.  But…someone has been following him all this time and sees what he has discovered.
In “The Gal Who Got Rattled”, Alice (Kazan) and her brother are in a wagon train headed for Oregon, where he has a business opportunity and the hope that his partner will want to marry Alice.  Unexpected events occur, which means that Alice is on her own and must make decisions for herself.
Finally, in “The Mortal Remains” five travelers are in a stagecoach headed for Ft. Morgan.  It’s a motley group: Two bounty hunters, a French gambler, the wife of a minister, and a trapper.  They have rather tedious arguments about humankind (“There are two types, hale and frail”, “No, there are the upright and the sinners”). The trapper says he has only one kind, the dead, “but they’re different…” he allows.  The fears of death among three in the group are readily apparent when it’s time to stop, and the “bounty” of the bounty hunters is carried out in a bag and inside and up the stairs.  They have to force themselves to go inside.
The “surprised by death” theme is one thing that connects all the stories, except for the last one in which we’re left with not being sure whether or not the three passengers have something to fear.  At any rate, death is on their minds.  And, by the way, the Coen meanings/points/connections between the stories are not obvious in the least.