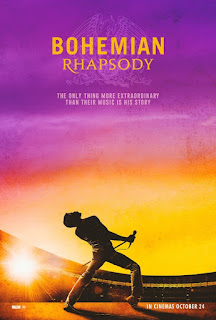 Bohemian Rhapsody does everything a good music biopic should:  It gives multidimensional pictures of the main characters; includes large doses of the music; uses creative lighting, camera work, production design, and special effects to glamorize the action; and is engrossingly entertaining.  Freddie Mercury as a subject (expertly rendered by Malek) makes such tasks easier with his flamboyance, creativity, wit, and soulfulness. The filmmakers did an excellent job in showing his charm, complexities and idiosyncrasies in an endearing manner, just as I imagine the man actually appeared.
It is also fascinating to get a look behind the scenes of deal making and intrigues that are part of the rock star world.  A scene that will be indelible is rejecting producer Meyers' face as he listens to Queen’s performance at the Live Aid Concert.  Priceless.  Just as with the main characters, the business people and aides to the band are presented as real humans with hopes, dreams, and failings in ways that makes them real to us.  Two of Freddie’s abrupt firings will be lasting impressions.
Malek is certainly a star who can play a star with ease and flair.  Hopefully, he will be remembered at award time, because this role is far and away different from, but just as good as, his highly successful “Mr. Robot” role.  The other actors playing members of the band (Mazello, Hardy, and Lee) are dynamic and have uncanny resemblances to the real people.  (Good casting!)  Freddie was unusual in his sincerity mixed with disdain.  Yet, most interestingly, the latter did not appear in his regard and concern for the love of his life, Mary (Boynton).  It is fascinating to see the real story in that they remained friends throughout their lives, with her having an understanding of his makeup and he realizing that he could not expect her to devote her life to him.  Seldom do we see such a relationship portrayed on screen, and Boynton captured the incandescence of Mary.
Newton Thomas Sigel’s cinematography made the concerts and ongoing dramas come alive in color and action, and John Ottman overseeing the music gave us many treats, especially the extended concert at the end during the real Live Action Concert.  Queen fans will be very gratified by this indulgence.

If one is remotely interested in rock stars and their psychology, this is a highly rewarding portrait.