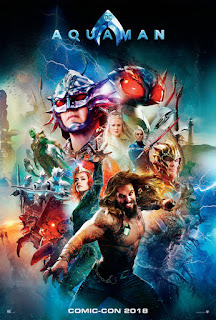 This is a spectacle—not in a good way.  It’s a series of showy special effects glorifying fighting and wars, although the filmmakers attempted to relate it to some kind of mythology.  The grandeur of the sights and conversations, however, are regrettably punctuated by modern idioms such as, “or screw you!”, or f-words, or corny comeback jokes that jerk you back to reality a la Hollywood.
The story from DC Comics rests on who will be king of Atlantis, the underwater kingdom—the legitimate son or the illegitimate “half-breed.”  Earlier, the princess of Atlantis, Atlanna (Kidman) got into a storm that deposited her into a lighthouse off the coast of Maine, where she was rescued and revived by the lighthouse keeper (Morrison).  They fell in love and had a child, Arthur (Kirkwood as the child, Momoa as the grown-up), the half-breed.  The bad part is that she was betrothed to the son of the King of Atlantis, and what she did was treason.  They were coming for her, so to save her child and his father, she returned home and was thought to have been killed at some point.
We see Arthur after that as an odd child who gets teased by his classmates; however, when he shows he has special powers at the aquarium, they back off.
When Arthur is a young man, he gets pulled into the struggle for a new king of Atlantis. (Keep in mind, he neverwantsthe job, but is drawn into it, presumably by destiny.)  The legitimate son (also the son of the queen) has already been installed as King Orm (Wilson), but not everyone is happy with his rule, which continues his father’s belief that land and sea are two separate realms that he wishes to rule over as “Oceanmaster.”
Despite his reluctance, Arthur is pulled into the struggle, but he will be aided by Vulko (Dafoe), Atlanna’s trusted advisor who has been charged with his instruction in military arts.  He will also be aided by the daughter of one of the underwater kings, King Nereus, Mera (Heard), who is betrothed to King Orm.  Yes, it gets complicated if one is not already familiar with DC Comics.
Many, many battles with spectacular feats will ensue until your brain is numb.  And the script is so thin it is of little use to the actors and holds no surprises for the viewer.