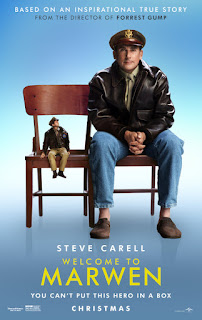 “Welcome to Marwen”—just know that your visit will be a strange one.  Based on a true story, this film by director and co-writer Robert Zemeckis was inspired by a 2010 documentary about the life and work of Mark Hogancamp, a man who was severely beaten outside a bar after his reference to people he was chatting with about cross-dressing.  Prior to this incident, he was an illustrator; but after his impairments (occurring after a nine-day coma and having to relearn how to eat, talk and write), he turned to photography; and to cope with the psychological after-effects, he used dolls and fantasies about them to work through his increased anxiety.
The film begins with one of these fantasies in which the doll “Mark” (Carell) encounters German soldiers in WWII, and just when it looks like they will capture him, a group of powerful female soldiers rescue him and finish off the Germans.  This is only one of hundreds of scenarios Mark has come up with, in which he draws on the people he meets in his community for his characters (dolls).
Mark Hogancamp is regarded as an “outsider artist”, one who has little/no educational background, but whose works become highly regarded by connoisseurs.  It’s admirable that he was able to use his remaining skills after the injuries to therapeutically work through the trauma.  Robert Zemeckis’s idea of using this material for a feature film is intriguing, but somehow it doesn’t work.  The actors are excellent (especially Carell showing the confusion and bewilderment of a troubled soul), and the special effects to capture puppets as real people are likewise impressive.  However, the alternations between reality and fantasy fail to engage.  I think another aspect of the film that doesn’t work is the attempt to portray a therapeutic approach—especially one used by an individual on his own. This is a turn-off for many viewers, who are not necessarily able to grasp the value of, for instance, an adult “playing” with dolls.  Unfortunately, I imagine that many will regard this as simply silly, even though it’s not, really.
On a final note, it’s disquieting to see so many fine actresses wasted, such as Diane Kruger, Gwendoline Christie, and Janelle Monae.  Their roles are minimal.  Merritt Wever is perfect as a sensible, kind helper who is able to see past the weaknesses of Mark. Leslie Mann is featured more than the other actresses, but her child-like voice and manner bring nothing to the table of quality.

Visiting Marwen is likely to unnerve most viewers.