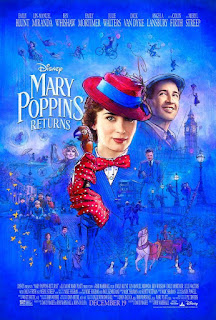 Everything is coming apart at the seams in the Banks household; Mr. Michael Banks is grieving for his wife, and is having a hard time managing without her. Their three children are remarkably responsible, but they are just children, and the housekeeper/cook is losing her grip as well.  Michael’s sister Jane comes by from time to time and does what she can to bolster things up, but a major threat looms with the possibility that the house Michael and Jane grew up in will be repossessed by the bank after Michael missed three payments.
Yes, it seems like the perfect time for Mary Poppins to drift down on her umbrella and pop in (sorry—couldn’t resist the pun).  It happens magically—as do many things having to do with the nanny—when young Georgie chases after a kite and it keeps rising with him attached. Jack, the town lamplighter, is helping Georgie pull the string with all his might to bring the kite down, when who should appear down through the clouds but Mary herself.
Now, the three children don’t know who she is, as she was the nanny for their father and Aunt Jane when they were kids.  And when they learn that she has come to be a nanny for them—humpf!—these responsible children, especially the two older ones, can’t see the need. Michael is troubled because he can’t see how they’ll be able to afford her, but Jane—often the voice of reason—advises him to welcome her.
Of course, it doesn’t take long for Mary Poppins to exert her authority and magic (just what the family needs). She wows them with a few things, but wins them over with a thrilling and beautiful sequence where she prepares a wondrous bubble bath with all kinds of beach-type things thrown into the bubbles then shoves each child in for their bath.  She follows, and we are treated to some of what Disney does best: a colorful fantastical trip down into the ocean filled with exotic marine life.  This is the kind of nanny to have.
All sorts of intrigues, emergencies, and close calls follow, and it’s touch-and-go until the very end.  Director/producer Rob Marshall’s follow-up to the 1964 production of Mary Poppins is largely successful in sustaining the Poppins and Disney brands, being entertaining for children and adults, and achieving a mixture of fancy, excitement, and human values.
Emily Blunt has received a lot of advance press about her Mary Poppins role, and she comes across splendidly.  Contrast her role here and of that in A Quiet Place, Edge of Tomorrow, and Sicario, for example, to appreciate the full range of this actress’s talent.  Her acting here is as praiseworthy as in other films; however, as good as her voice is, she is not up to Julie Andrews’ first Mary Poppins (1964), and that is a slight detraction.  In a similar, but different way, Lin Manuel Miranda’s voice, while very fine and engaging, doesn’t quite mesh; although I think this has more to do with the composers’ (Marc Shaiman, Scott Wittman) work than as a function of his voice and skill.  When he sings in rap—which he is known for, and which I presume he has contributed to the material—he is his usual fine performer.  (I dearly loved hearing his British accent.)  Overall, I think the score lacks the pizzazz of the 1964 version.  When Blunt and Miranda sing together, they almost rescue the whole score.
A standout here is Meryl Streep as Topsy; she can immerse herself into a role so completely it’s hard to find Streep in it.  The sequence with her is one of the most entertaining in the film, and brings up important points for both children and adults about perspective.
Other instructive sequences for children include ways to think about and deal with the loss of a loved one, the message that even if one is a child he/she can be helpful to adults, and the optimistic idea that things that may seem impossible can actually be accomplished.
Cameo performances by Dick Van Dyke (reprised from the first rendition), Angela Lansbury, and Colin Firth are entertaining and engaging.

An updated version of the Mary Poppins story that largely succeeds.