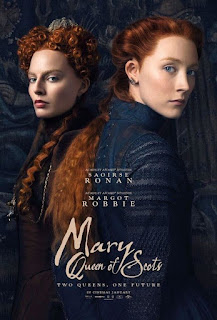 The movie reflects the views of historian John Guy in his book, My Heart is My Own: The Life of Mary Queen of Scots, which departs from previous historical accounts that were more critical of Mary and her leadership, but nevertheless won the 2004 Whitbread prize for biography.  In this version of history, Mary was betrayed numerous times, ending with her beheading by order of Queen Elizabeth I of England.  Whether it is regarded as historical truth or a biased perspective, I’m not one to judge; but as a movie it is fascinating, and contains more than a kernel of truth about human nature and the willingness to stop at nothing in the interest of personal ambitions.  Beau Willimon’s (of HBO’s “House of Cards” fame) screenplay brings excitement, suspense, and a realistic(?) view of political intrigue. As much as one can rely on Guy’s accounts, the viewer will feel better informed about   English-Scottish conflict, particularly as relates to Mary, Queen of Scots.
Whether factual and intended, or simply a reflection of male-female relationships in general, the movie illustrates the difficulties many men have when women are in power.  In this case, both queens rely heavily on male advisors who may or may not have their superior’s best interest in mind.  It seems that men in both realms have their own agendas—which always seem to include weakening of the female power to be replaced by a male authority.
Both queens are pressured to produce a male (or secondarily a female) heir to the throne. Elizabeth, who identifies with men, refuses to marry (because she can’t find a man willing to be a wife) and remains single throughout her life, despite her chief minister’s urging to find a mate.  There are rather comical scenes when she sends Robert Dudley, her favorite advisor whom she is sweet on, to woo Mary, as an ultimate plan to control Scotland; but Mary sends him back to England, and he is a pawn for a time after that.
Mary takes matters into her own hands, and when the first seducer comes courting, she makes sure she will bear a child.  Unfortunately, he is Lord Darnley, a man of weak character dominated by an ambitious father, who will have undue influence on him against Mary. Nevertheless, she does get pregnant and bears a son she names James, after her father and an uncle.
Major unrest and military encounters ensue through the years, with one side or the other winning, and always planned and executed by the men surrounding the queens.  In this account, Mary comes across as a strong military leader as well as one with sound principles (she is accepting of both Protestants and Catholics, a bitter divide at the time) and astute political sensibilities, as attested to by Queen Elizabeth herself.  Her pleas with Queen Elizabeth are eloquent, but unfortunately may be followed by what appears to Elizabeth to be insubordination.
The work of Saoirse Ronan and Margot Robbie are both award-worthy performances. Each captures her character’s essential elements and makes us forget the actress and “believe” in the character. They “own” this film so much that even though we get strong performances from Guy Pearce and other actors, it is really Ronan’s and Robbie’s film.
Kudos to Beau Willimon for the script, Max Richter for the music, James Merifield for production design, and John Mathieson for cinematography. Director Josie Rourke shows talent in this her first major film to helm, I will be looking for her work in the future.

History is presented as the amazing drama it so often actually is.

Posted by donnarcopeland at 10:16 AM