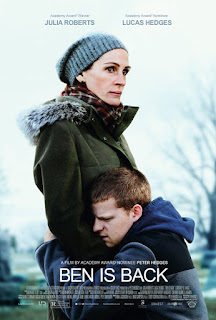 As can be seen in the trailer, Ben (Hedges) pays a surprise visit to his family at Christmastime, making everyone nervous.  His mother Holly (Roberts) is thrilled to have him and assumes an air of optimism, whereas his younger sister Ivy (Newton) and stepfather Neal (Vance) are wary.  The two younger children are the only ones greeting him with glee devoid of concern.  Because for all her optimism, Holly still proceeds to stow away drugs from the medicine cabinet and jewelry items, prompting quizzical looks and comments from her daughter. Ben has been in rehab for an addiction, but reports his sponsor gave him permission to leave.
What follows is 24 hours packed with emotional upheaval, distress, many questions and conflicts, and a sprinkling of happiness.  I get the impression that the film offers a realistic look at what families go through when their child(ren) develop a drug addiction.  The agonizing question revolves around trust: When do you trust them and when do you not?  How do you tell when they are telling the truth and when they are lying?  How closely do you observe their every move?
It gets even more complicated when the addict’s intentions are noble, but he puts himself and his family at risk.  It never occurs to Ben that a simple shopping trip to get presents for his younger sibs would prompt a string of events.  (He can’t just put his name on presents his mother has already bought; that wouldn’t be honest—honesty is a primary goal in rehab.)  Nor does it occur to him at first, or to his family, that there are extended “side effects” to his addiction, i.e., people in town who want revenge for what he did in the past.  Like many addicts, he had to support his habit by dealing.
Writer/Director Peter Hedges knows exactly how to bring the viewer along on the experience of an addict’s family visit, by keeping you guessing about the same things family members are questioning, especially when family members themselves are not always telling the truth.  I had to smile at the number of times a family member takes off on his/her own refusing offers of help from someone else.  At one point, Neal says to his wife, “We’re supposed to be a team!”  But she’s afraid he will deal with the problem in a way she disagrees with, so she acts as if everything is under control.  Yes, it gets so complicated.
The plot is engaging, one cares about the family from the start, and there are many clenched-teeth moments.
This is a film that may frighten you and depress you, but it is worth the strain in that it is informative about a problem that is currently plaguing our country in an epidemic.  Like the story in Boy Erased, it demonstrates that even in upper middle class prosperous families addiction can be their undoing.  It’s no longer just the poor and disadvantaged who have these battles to fight.  Watching moves like these are not only drama and thrillers, they are informative and helpful to those who may be going through the same things now, in the past, or in the future.  I appreciate that in Boy Erased, it is the father who takes the predominant role in helping his son and that it is the mother who takes that role in Ben is Back.  Both are good models, and both make clear that unconscious forces sometimes make them less than effective.
Lucas Hedges (son of Peter Hedges) has much to boast about for his role in this film as well as recent others: Three Billboards Outside Ebbing Missouri, Lady Bird, and Manchester by the Sea.  They all illustrate his acting range and quality of performance.  Here, he achieves a realistic mother/son connection with the acclaimed and experienced Julia Roberts, who can look beatific in gazing at her children, adopt a charming but genuine response to friends, and burst out with fury and determination in the face of dispute and conflict.  It’s a delight to watch her cast her spell on dozens of diverse roles.
Ben is Back is not a movie for everyone, but is for those who have social sensitivities and curiosity about the world around them.

One day in the life of a family blessed(?) with a surprise visit from one of their own.

Posted by donnarcopeland at 4:56 PM